This relatively unknown, low budget indie thriller caught my eye due to it’s concept.  A teenage kid who believes he could become a serial killer due to an obsession with murderers and his own sociopathic behaviour, stumbles on an actual serial killer case in his home town.  That’s a (pun intended) killer concept right there. 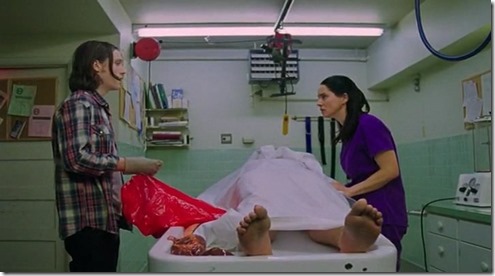 Borrowing a tad from the overall plot of Dexter (takes a serial killer to track a serial killer) and with a ghoulish tongue-in-cheek sense of humour, I was easily along for the ride.  The idea of exploring serial killers and lending that knowledge to tracking one down is interesting, but my gripe with this is that it’s a movie that doesn’t entirely have the balls to follow through on it’s concept.  That being said performances are decent, especially genre legend Christopher Lloyd and young unknown Max Records (who clearly has to open a vinyl store).  I also thought the killer’s motives were strangely sympathetic and at times it did get pretty grim and macabre (the lead character also works in a mortuary, so is surrounded by death).   Now I’m going a little into spoiler territory in the next paragraph so if you want to go into this one totally fresh STOP READING NOW.

(mild spoilers).  My issue is that the killer is not human, but some sort of creature and like movies before it (Jeepers Creepers, IT) that began promisingly with an eerie villain but later descend into ‘its a monster or an alien’ when they’re finally unmasked is both lazy and rather contrived.  Why not make the serial killer a human being?  Or is that a little too close to reality?

Some out of place choices of rock music ruin the mood occasionally, and overall it came off like an extended X-Files episode (not a bad thing).  However I still managed to enjoy this despite it’s shortcomings and a reliance on horror movie convention.

2 thoughts on “I Am Not A Serial Killer”