I went through a phase of collecting the movies of revered Italian horror director Dario Argento in the early-to-mid 2000s, and had nearly every movie he’d made on DVD, whilst always trying to seek out the most complete, uncut versions of his art.  With the advent of Blu-ray I sort of began collecting again, to a less obsessive extent but have been happy to see some of his movies get deluxe releases in recent times.  Therefore we come to one of his more bizarre and most mistreated works. 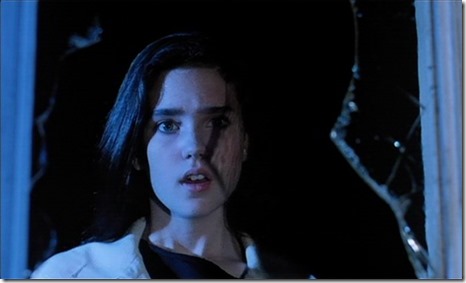 Just prior to finding world-wide fame in children’s fantasy ‘Labyrinth’ this stars a young Jennifer Connelly as a student who comes to stay at an elite school for girls in Switzerland and quickly befriends her rebellious roommate.   However at the same time there have been reports of a series of brutal murders involving female students and with the help of a paraplegic insect expert played by genre legend Donald Pleasence and Jennifer’s own ability to communicate with insects, an investigation ensues to unmask a killer.

This blends two of Argento’s favourite styles; dark-fantasy and murder mystery and is very similar in tone to his acclaimed classic ‘Suspiria’, sort of a spiritual successor you might say.  However unlike that movie this lacks the excessive style and garish colour pallet (despite a few visual flourishes here and there).  We also get some woefully amateurish performances, even from Pleasance who sports a dodgy accent throughout (is he attempting Scottish?) and dialogue is delivered for the most part personality-free.  The plot is also a bit messy and not very well written with some faintly ridiculous moments (Jennifer declaring to a bunch of bullying schoolgirls “I love you all” and Pleasence happily sending Jennifer to track down a killer).  However if you can look past such shortcomings you still get an entertaining and suitably-violent ride with several great set-pieces and excellent use of a pulse pounding score by not only Argento regulars ‘Goblin’ but also ‘Iron Maiden’ and ‘Motorhead’.  Far from Argento’s best, but with a b-movie schlocky vibe to it all, there’s still fun to be had and remains streets ahead of the director’s more recent work.  There’s also a chimp brandishing a straight razor – so what’s not to love?

The Blu-ray, another impressive job from Arrow Video comes with three cuts of the movie, the International Version at 110mins, the slightly longer Italian Version at 116mins and the heavily cut Creepers U.S. release at 83mins.  My preference is the International Version even if it has some long drawn out moments of throwaway dialogue that could easily have been trimmed.  The Italian Version is pretty similar but has inserts of Italian-only scenes complete with subtitles but is great for completionists.  I haven’t watched the Creepers cut but hear it’s not good at all.    The new 4k restoration of the image is very good however.  Clean and mostly pretty detailed.  The soundtrack (in 5.1 DTS HD Master Audio and 2.0 Stereo) is also very pleasing even if dialogue sounded a bit low (especially noticeable when the music kicks in) and surrounds are given some love with the various music inserts.  Extras are plentiful with a feature length documentary consisting of new interviews with Dario Argento, actors Daria Nicolodi and Fiore Argento (no sign of Connelly sadly) and with production crew and effects artists.  We also get a brilliant commentary on the Italian Version by author Troy Howarth.  Rounding out the release is a detailed 60 page booklet.