The movie that’s probably more famous for ‘allegedly’ causing the break up of Brad Pitt & Angelina Jolie’s marriage than it is for the story or movie itself.  This WWII set drama follows a U.S. soldier who after being thrown together with a French agent during a top secret mission, falls in love with said agent and subsequently marries her on return to London.  However a year into their marriage with a baby in tow, the soldier’s superiors inform him they’ve intercepted information that suggests his wife might be a Nazi spy. 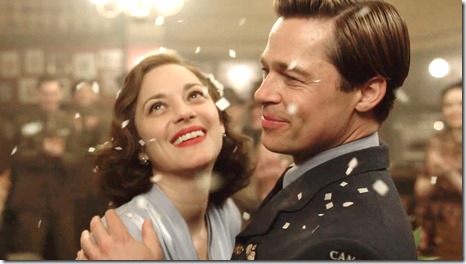 Directed by Robert Zemeckis (Forest Gump, Back to the Future) this was a fascinating and engrossing story let down a tad by (surprisingly) not all-that convincing chemistry between the principal leads and somewhat limited production values where several scenes look like they are on a set or in front of green-screen (the desert sequence especially).  Pitt, one of my favourites seems to have been phoning it in of late, with his less than stellar turn in the otherwise enjoyable ‘Fury’ and that follows on here.  I don’t know what is going on, perhaps it’s his at the time choppy personal life bleeding into production, but for the most part he looks bored.  Thankfully Marion Cotillard is much more convincing and considering the suspicion surrounding her character, pulls it off brilliantly both as a believable loving, sexy wife and perhaps something else.  The mystery does however get wrapped up very easily and what appeared on the surface to be a solid concept seems to run out of depth as it nears it’s conclusion.

For the most part though, as a fairly well observed drama, with several tense situations and a some surprising violence … this still managed to entertain.  It just could have been even better if Pitt had really gone for it.