The arrival of a mysterious Japanese hermit in a small South Korean village sparks suspicion and escalating stories amongst the townsfolk, which quickly turn to hysteria when a strange virus begins to cause the people to turn violent and kill each other.  A bumbling Police Sergeant becomes involved in the investigation and soon learns his young daughter may have contracted the same virus. 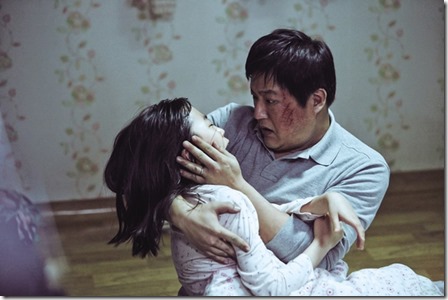 This acclaimed horror / thriller is directed with no-end of visual flair by Na Hong-jin (The Chaser) and is filled with interesting, flawed but very believable characters and not-unlike-Seven atmosphere in a constantly rain-swept village.  It has a very compelling mystery at it’s core and several strong performances that kept me interested.  The inclusion of Korean and Christian beliefs and superstition mixed with the spreading of rumours and prejudice towards the mystery hermit was also a clever approach.  Add to this some gorgeous cinematography as well as several memorable scenes and I was having a great experience with this latest Korean effort.

However as the story neared it’s conclusion, a twist turned events on their head but thankfully impressed me with how well it suddenly made everything fall into place … that was until a second twist turned that revelation on it’s head also, and then I was left confused.  Up until that point I’d been gripped and the very well observed and powerful ‘father trying to save his daughter’ narrative was looking to make this an easy recommendation.  But despite a dark-as-it-gets ending (which did leave it’s mark) I came way feeling rather cheated.  Shame.