A struggling actor (Craig Wasson – A Nightmare On Elm Street 3: Dream Warriors) finds himself looking for somewhere to crash following the discovery of his girlfriend’s affair, but soon descends into an underworld of voyeurism, sex and a who-dunnit murder mystery. 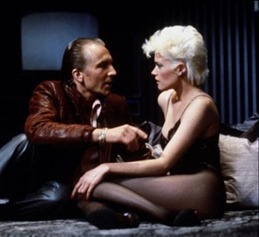 I’ve always admired the movies of prolific film-maker Brian De Palma and consider some of his output all time classics (Carrie, Scarface, The Untouchables).  He has a distinctive visual eye and can put his skills to a number of genres.  However it’s when his movies attract comparisons to the movies of Alfred Hitchcock and also Italian shock maestro Dario Argento that I become the most interested.  Body Double bares a strong resemblance to both film-maker’s works but also has a perfectly sleazy tone that references a different time and is very much a celebration of 80s excess and exploitation.  The story for what it is isn’t that well done and is fairly obvious and easy to predict especially if you’re at all familiar with any of the cast.  However what is fun is De Palma’s cinematic eye that can make even mundane sounding sequences, like a journey through a shopping mall or a beach front terrace, enthralling due to some clever camera work and genuine tension.  Craig Wasson is likeable if a rather unsympathetic character, and I’d forgotten just how much fun Melanie Griffith used to be and is adept here at delivering some great lines which are probably too explicit to repeat.  Yet the movie is on a whole, especially considering De Palma’s impressive catalogue; a bit of an oddity and takes some alarming shifts in tone and style leaving me wondering what was the grand plan here…it really does feel a little thrown together.  For a piece of 80s genre sleaze however, I’d still say give this a chance.

The Blu-ray suffers from a few smudgy scenes, especially towards the end of the movie for some reason … but this 4k restoration is otherwise decent looking with strong colours and some nice detail both in close-up and in De Palma’s grand wide shots.  Dialogue is also crisp and free of lip-sync that I could see, and is delivered in the original stereo as well as a 5.1 soundtrack, which although not really making much use of surrounds is effective, especially in the lengthy ‘Relax’ sequence (spot the cameo by Holly Johnson).  This collector’s edition from Indicator boasts a 40 page booklet that has an in-depth interview taken from 1984 as well as a ‘Brian De Palma’s Guilty Pleasures’ segment exploring the director’s influences.  The Blu-ray itself comes with a series of featurettes with interviews with cast and crew, some archive, others more recent and proves invaluable for those interested in film-making and that of the movie itself and it’s legacy.  Surprisingly no commentary which would have rounded this release off superbly but as it stands this is above average treatment for probably one of De Palma’s lesser efforts that still makes for a worthy purchase.