I was a little apprehensive going into this third instalment after not really liking The Chamber of Secrets.  However this time around we’re presented with a more fully realised narrative that thankfully isn’t borrowing too much from earlier movies and has it’s own thing going on.  Harry continues to be mistreated by his uncle and aunt and chooses to run away from home one night until an enchanted (triple) decker bus arrives to whisk him back to Hogwarts.  Harry soon learns that a dangerous former wizard and convicted killer has escaped from the prison of Azkaban and is rumoured to be heading to the wizarding school. 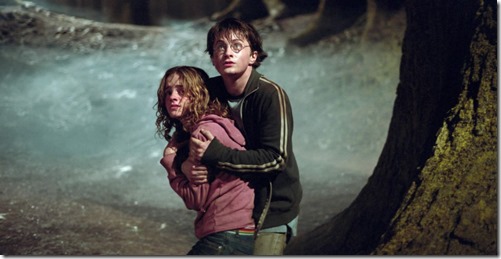 Like the first movie, there’s a clear atmosphere of magic and wonder at play and here the world feels like it’s really opening up and developing it’s ideas.  Add a great cast now including David Thewlis as a newly appointed professor and again great turns from Robbie Coltrane and Maggie Smith and I was quickly put at ease.  The backdrop of the escaped prisoner as well as some spectral demons called in to help protect the school created a welcome sense of dread.  Daniel Radcliffe this time around seemed strangely laid back for the first half of the movie, not reacting all that convincingly to a series of you’d think scary and alarming encounters … but he comes out of his shell eventually.   A nicer surprise was a stronger focus on Emma Watson’s Hermione who is now more confident, less arrogant, and Rupert Grint’s Ron continues to be great fun.  Yet I’m still not that interested in pantomime bully Draco Malfoy despite Tom Felton growing more into his role.

Aesthetically gorgeous throughout with much more stylish cinematography and a greater emphasis on actual learning to be a wizard, lessons etc. and some fun ideas including a magical map and a griffin bird creature … made this entertaining from beginning to end.  The final act is also superb with some inventive twists.  Gary Oldman’s Sirious Black is decent and despite being recast, Michael Gambon’s Dumbledore may possibly be even better than the late Richard Harris.  On this evidence, what comes next is going to have it’s work cut out to top this one.

1 thought on “Harry Potter and the Prisoner of Azkaban”