Director John Carpenter has certainly flirted with making a B-movie, the type that was all the rage in the fifties and sixties, like the infamous Plan 9 From Outer Space etc.  Yet his skill behind the camera, his usually great casting choices and more often than not solid story-telling gave his movie’s somewhat higher standing amongst his imitators and predecessors.  However in 1987, he finally did it … for better or worse. 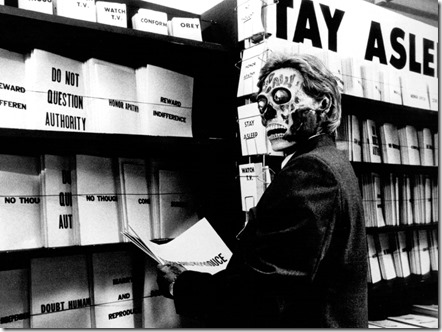 This stars ex-wrestler ‘Rowdy’ Roddy Piper as a drifter who wonders into town in search of an honest days work for an honest days pay.  However it’s not long before he discovers something strange going on with the people and city around him … and the discovery of a pair of sunglasses opens his eyes to what appears to have been a secret alien take over of mankind.  Does he just stand by and accept it, or does he do something about it?  What do you think? 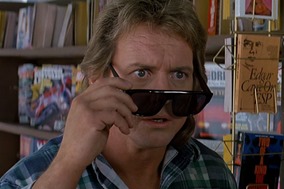 The concept here is a good one and it’s commentary on consumerism and media obsession and government corruption is clever, but the surrounding movie is anything but.  First off it stumbles with Roddy Piper – who I might add spends the first half of the movie wondering around and staring at things, expressionless.  This translates into an equally vacant performance even when the shit hits the fan and he has to get all Rambo.  He may look the part, what with his mullet and beefcake build, but he can’t deliver lines for toffee … even the now iconic ‘I came here to kick-ass and chew bubble-gum’ is delivered totally flat like he doesn’t even care if anyone is listening.  Add to this co-stars who are equally a mixed bag.  Genre stalwart Keith David is ok, but Meg Foster is utterly wooden to the point I was wondering if she was being like that intentionally.  Of course none of this would matter all that much if Carpenter was on form, but here his direction lacks atmosphere or tension and just doesn’t bring much to the show apart from the occasionally well filmed punch up or shoot-out.  I liked the quirky nature of this though despite it’s myriad of shortcomings and loved the idea, and well it certainly had a nutty charm.  Just not enough going for it to be one I’ll be rushing back to any time soon.

The Blu-ray thankfully is a lot more worthwhile, from a Carpenter and film-fanatic stand point than the movie itself.  We get the always entertaining Carpenter doing commentary duties alongside Piper, as well as new interviews with the director and cast.  There’s also archive TV spots and an old documentary exploring the making-of.  The movie itself is in great shape with a decent image quality that whilst generally a bit soft has some acceptable detail and strong colours.  The soundtrack is available in stereo DTS HD Master Audio but dialogue is crisp and Carpenter’s usual synth theme is well utilised if somewhat forgettable.  Overall rather undeserving treatment for such an average movie, but as a fan of the director I’ll be exploring this stuff regardless.