As soon as I heard about this I wanted to see it.  Director Richard Linklater’s as he puts it ‘spiritual sequel’ to one of my all-time favourite movies; Dazed and Confused.  This like Dazed follows a group of high school students but is now set in 1980 rather than that movie’s 70s and on the eve of starting college as apposed to the last day of school.  It primarily follows baseball pitcher Jake (Blake Jenner) as he arrives at a frat house and becomes acquainted with the rest of the college baseball team; a group of guys who seem obsessed with getting high, partying and getting laid. 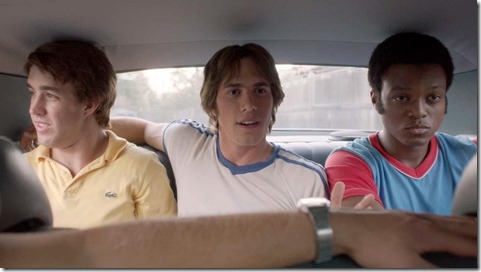 It’s hard to not make comparisons with that earlier movie, as I kept being drawn back to it for everything this one lacked.  Jake is the only particularly likeable character here but even he has very little ark but for a tacked-on romance towards the end.  Everyone else are simply obnoxious stoners or loud-mouthed jocks who despite being believable … I really wouldn’t enjoy being in the company of.  Also Jake’s story is the only one we follow, nobody else has a ‘journey’ or any real defined personality and frankly several of the characters are very similar to one another.  Also situations rarely had any pay off, like an early scene with a water bed and a little later on one character having to leave for the weekend because his girlfriend might be pregnant … but when he returns, it’s never mentioned again.

That’s not to say the movie doesn’t have it’s merits.  Linklater’s keen observations of the era and setting are well done and the soundtrack on the whole is decent (the movie starts off well with The Knack’s ‘My Sharona’).  And well, It all looks pretty good too, shot with an  early eighties vibe that works a treat.  Just a shame the wafer thin characters and lack of interesting situations means that unlike ‘Dazed it’s unlikely this one will achieve anywhere near the same cult status.