I was certainly intrigued by this concept.  A malevolent spirit that disappears in direct light but is deadly in the dark, who seems to be haunting a small family, that of a single mother and her little boy.  When said boy turns to his older, rebellious sister for help after one too many strange goings on, soon an investigation ensues … subsequently causing the family to look into their own past in the process. 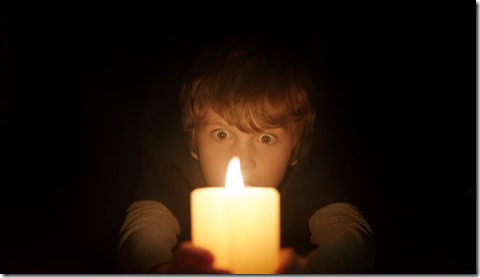 Whilst fairly simple in it’s idea I did find this pretty unnerving throughout what with an evil spirit seemingly capable of jumping out from any darkened corner or darkened room.  The maker’s had a field-day with this idea and I certainly got a kick out of the various ways the idea was explored, complete with an effective ‘shooting at the ghost’ sequence.  However the frights don’t exactly come thick and fast and rely a little too much on loud noises and character reactions more than being scary in their own right … which they are but the other stuff dilutes the experience somewhat.  Also I wasn’t keen on the occasional times the spirit spoke … again diluting the scariness by giving it too much character (the remake of ‘Ring’ had a similar misstep).

The casting is pretty decent, although only Maria Bello is recognisable but suitably unhinged as the troubled mother.  I also thought the young actor playing the boy was above average.  Add to this a complex turn from Teresa Palmer who manages to be more than a typical, moody twenty-something.  The final act is also solid and full of action with some novel twists on the concept.  But I did hope for a bit more light to be shed on the spirit’s origins, which sadly is ignored in place of a rather ballsy ending.  So despite good intentions, this doesn’t quite reinvent the horror movie and is a bit too Hollywood with some of its scares … but regardless this was still a suitably creepy and entertaining experience.

1 thought on “Lights Out”