Occasionally a movie comes along that you don’t find out about through expensive advertising campaigns, but by sheer accident, watching something on YouTube and it gets a brief but enthusiastic mention.  That was my experience and has to be said I still wasn’t rushing out to see it, but happened upon it when browsing newly released rentals, so thought I’d give it a shot.  And am I glad that I did. 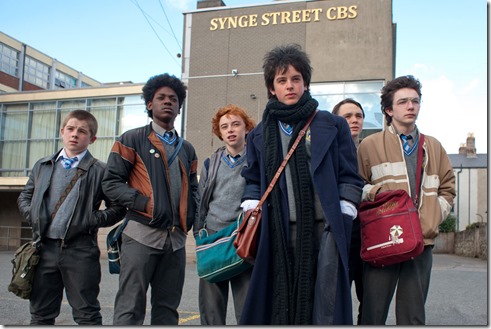 A young kid (Ferdia Walsh-Peelo) growing up in Dublin during the mid eighties, finds his family falling on hard times and has to move schools from a posh public school to a regular school and quickly becomes the target of the local bully and a tyrannical head master.  However he’s quickly distracted from such woes when he spots a girl in the neighbourhood he’s immediately drawn to.  Influenced by his slacker elder brother’s constant speeches about music he asks said girl if she wants to star in his music video for his non-existent band, and when to his surprise she agrees, he realises he actually has to put a band together.

With the backdrop of the 80s, the new-romantic fashion trend, pop music like Duran Duran and The Cure, I found myself transported back to my childhood and an era that seemed both  alien and all too familiar at the same time.  This utterly charming and feel good movie is full of personality and interesting characters and packs a lot of heart into it’s story.  Think a cross between Gregory’s Girl and The Commitments and you may see what this one’s going for.  It’s nostalgic and funny but also authentic to what was going on back then.  The relationship between the kid and his elder brother is wonderfully well observed and made me think of myself growing up, looking to my own sibling in a similar way.  It’s also full of memorable songs, some of which were penned for this movie by writer / director John Carney, who apparently comes from a musical background himself.

To nit pick would be to do this a disservice as it works on pretty much every level, but I did find it a bit odd how the kid and his band mates go alarmingly fast from a bit dodgy to very professional, and the ending was a little silly.  Yet this is a movie you’ll probably not have heard of or would pass by in a heart beat …but really don’t as it’s one of the most purely entertaining and thought-provoking movies of the year.  Essential.