I can’t believe I’m typing this and NOT making it up.  On Monday night of the 13 June 2016…I got to MEET my favorite band in-the-flesh and tell them how much I love their music and even have a photo taken.  That’s not to mention the fact I also got to watch them rehearse and eventually perform a full concert at the Troxy in London. 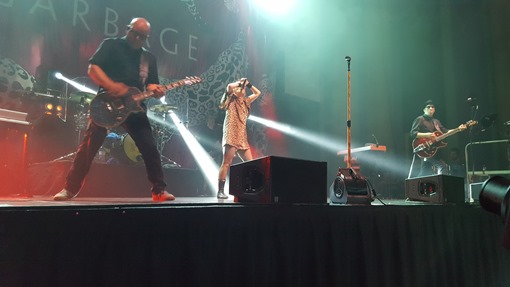 Front row … what an amazing view

Yes I just typed all that and it really happened.  I am looking back on it now in disbelief.  Lead singer Shirley Manson was everything I could have hoped and more and on getting to actually speak to her, I almost lost it emotionally, but with her assistance I didn’t cry – but it came worryingly close.  She was a real gem and so nice and genuine.  In fact the same can also be said for Duke Erikson and Steve Marker, who were so lovely and I shook their hands and well, just wanted to press pause on the moment and wallow in it.  It was simply one of the greatest night’s of my life thus far.  Sadly drummer and producer Butch Vig couldn’t make the gig as he’d been signed off sick with a sinus infection. 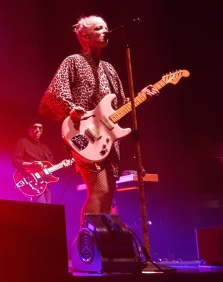 The concert that followed this was incredible, spanning the full gamut of their 20+ year career and every song was performed with such energy, enthusiasm and power that I was totally floored.  Personal highlights were the rarely sang ‘So Like a Rose’ which Shirley performed aided by her guitar and was a tribute to photographer friend Matt Irwin who had recently passed away.  Also my favourite Garbage song ‘Why Do You Love Me?’ was delivered as a thankyou to the loyal fan-base, and it was also great to hear several new tracks from the new album, including ‘Blackout’ and ‘Empty’.  I had purchased a VIP package for this event and as well as what I mentioned above, I also got early entry and was right at the front.  In comparison to the last time I saw them at Brixton Academy, I found the sound although very loud, much better and I didn’t come away with the ringing and deafness I experienced last time.  So it was such a better experience and with all the trimmings I can safely say this was a dream I never even considered would be realised … but it was! 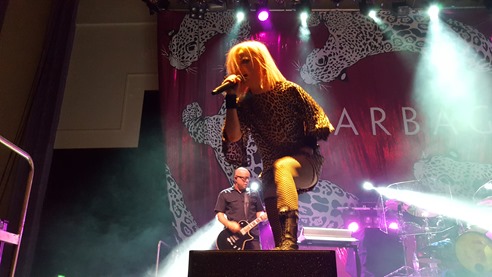 Yes at one stage Shirley Manson sang directly to me

The pictures above were taken by myself so you can get a good idea of the view I had.  What an experience which I fully recommend if you get the opportunity.  I conquered several fears and personal obstacles to achieve this and feel so proud of myself for doing so.  Also few front women in the industry have the sheer charisma, likeability or stage presence of Shirley Manson and I tell you now, she delivered 100%.

Thank you Garbage for such an amazing experience!