Director M Night Shyamalan has certainly fallen from grace since the acclaim he garnered for this much loved supernatural drama.  Sitting down to watch it, I felt nostalgic for just how much buzz the director’s name created for a short while there.  Bruce Willis plays a child psychologist whose latest case involves a nine year old boy, Cole (Haley Joel Osment) whose bullied, an outcast in his community and a constant concern for his single mother, played by Toni Collette.  However Cole hides a secret; the fact he can actually see the dead walking around and often communicating with him, and this is something Bruce Willis tries to help him with. 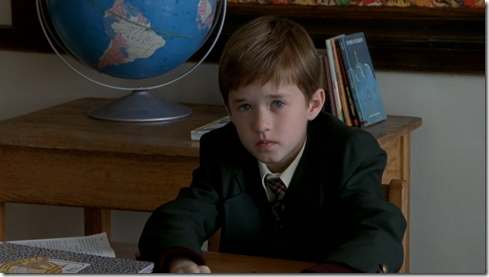 A slow burning but gripping with a stunning performance from Osment, truly one of the most gifted child actors of his generation.  He carries the movie brilliantly, proving both vulnerable, likeable and heart-breaking.  His plight of living with an ability that he can’t tell anyone about, least of all his mother is really incredible to bestow on the shoulders of such a young character … but Osment makes it utterly real.  Willis is also very good and conflicted, in a marriage that has obviously seen better days and fighting against his own demons.  Collette also gets time to shine and is especially good in the scenes with her and Osment (that scene in the car towards the end almost had me in tears).

This is a very sad movie.  It’s bleak and moody and ominous, and also manages to be genuinely creepy, with Cole’s various encounter’s with different restless spirits.  M Night Shyamalan’s direction is faultless, full of little details and secrets – and that much talked about twist, which I won’t spoil is possibly one of the best.  I can totally understand why this movie is so regarded as it get’s everything right, standing out as a classic example of acting, writing and film-making coming together perfectly.  One of those movies everyone should see at least once … but to get the most out of it, see it again to view the movie in a different light.

The image quality is a little soft but suits the tone of the movie and colours, which are deliberately muted, especially help the use of red stand out.  Close-ups and street scenes are detailed though and overall it’s a good presentation.  Sound is also pleasing with clear dialogue, but apart from some decent ambient surround effects, is not about to be a 5.1 showcase.  Extras are plentiful however with a lengthy documentary ‘Reflections From The Set’ and a further doc on the supernatural called ‘Between Two Worlds’.  There’s also some shorter featurettes and a couple of trailers.  The lack of a commentary for this one is disappointing, but overall pretty good treatment for a genuine classic.

5 thoughts on “The Sixth Sense”