I wasn’t expecting to like this and had heard little fan fair other than it being the adaptation of the amazing story of French dare devil Philippe Pettit’s courageous tight rope walk between the twin towers of the World Trade Centre in 1974.  The remarkable achievement was the subject of a critically acclaimed documentary a few years back, Man on a Wire which I had wanted to see but never got around to.  So this movie is my first real exposure to what I consider one the most amazing things a human being might do in his life time. 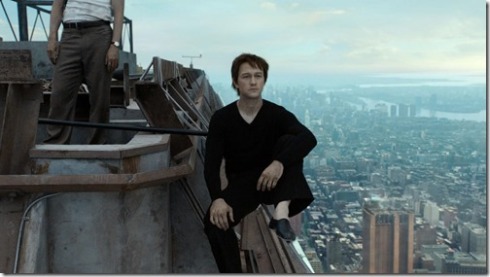 Joseph Gordon-Levitt, sporting a jarring but actually not bad French accent plays Philippe and he narrates the movie not just in voice over but back and forth presenting it from the statue of liberty with the view of the World Trade Centre in the back ground.  It’s a quirky but welcome approach to story telling and I found it gave the movie a light hearted, spirited nature in the way director Robert Zemeckis is famed for.  We get to see Philippe’s humble beginnings as a street performer, being mentored later on by Ben Kingsley’s circus veteran, and falling in love with local French girl Annie, a busking musician.  Along the way to realising his dream to tight rope walk between the iconic towers, Philippe gathers various colourful characters to be his ‘accomplices’ and I was very much along for the ride also.  What a fascinating and at times quite exciting story.  Zemeckis’s eye catching direction has a decent pace and plenty of intrigue, what with the shadow of the towers looming both figuratively and literally, and building up to ‘the walk’ is pretty nerve-racking.  Levitt is good if slightly caricature-like as Philippe but delivers a performance that is equal parts likeable and nuts.  The eventual walk itself is also incredibly vertigo inducing and brilliantly realised.  Although some of the obvious 3D shots distract at times.

Ben Kingsley for such a screen legend is under-used however and the initially interesting relationship between Philippe and Annie seems to run out of steam for no particular reason towards the end.  Also the movie curiously ignores some of Philippe’s other stunts such as a tight rope walk between the towers of Sydney Harbour Bridge in 1971.  I’d have also liked some sort of nod to the tragedy that occurred on 9/11 but the movie chooses to avoid it entirely.  Yet with the backdrop of an incredible true story and the wonderful visual spectacle on show topped off with solid performances … I still had a great time with this.

4 thoughts on “The Walk”