This is an easy movie to enjoy, if that is you enjoy very crude humour alongside genre satire and general piss takes.  You see, Marvel’s Deadpool as a character is like the anti-comic book character, he’s at odds with what we know and love about the Marvel universe and for that matter any comic book universe.  He’s self-aware, a killer, gun for hire and a joker … who just happens to have the same regenerative healing ability as Wolverine.

Ryan Reynolds plays the title character who is initially a low-key mercenary working at a bar for mercenaries (!) who meets the hot girl and falls in love, but then gets some bad news and resorts to a shady underground organization who promise to cure all his woes.  Yet with such a promise comes side effects and so yes, he becomes a bad-ass super (hero) but with horrific scars all over his body forcing him to remain in hiding and away from the woman he loves.  So revenge quickly becomes his only compulsion.  Reynolds is perfect; motor mouth humour and line delivery on excellent form and making for 90% the appeal of this movie.  Which is good as nearly everything else seems to be an after thought.  The characterization of anyone other than ‘Pool is wafer thin to almost non-existent and the plot for what it is … is as basic as it gets; they fucked up my face so I can’t get it on with my gal…so I’m out to kick ass – the end. 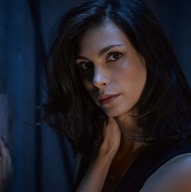 Some stylish and hyper-violent action sequences help matters considerably however, and every time Reynolds is doing his thing, the movie’s a riot.  Sad then that the in-between stuff, including a limp love story, a villain with surprisingly no agenda, and two of the most bland X-Men ever, fail to bring much of anything to a movie that let’s face it, lives or dies on it’s one gag concept.  Yes the movie was shot on a (for this kind of movie) low budget but that doesn’t mean it can’t have substance.  Fans of the character will lap this up, but despite enjoying this on a purely juvenile scale, the movie fan in me came away wishing there had been a bit … more.