I had heard some good buzz surrounding this gritty thriller set in the drug underworld of the Mexican Cartels, so was quite hyped up to sit down to it finally.  Emily Blunt (Edge of Tomorrow, Looper) plays an F.B.I. agent who attracts the attention of a team of government agents when she stumbles upon a crime scene associated with the Mexican drug barons.  Given the opportunity to join a top secret mission into Mexico, she at first thinks this is a chance to further her career, until eventually she starts to realize maybe what she’s involved in may not be strictly by the book. 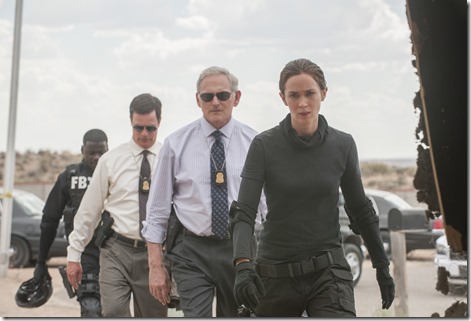 Skilfully shot and with a very authentic feel, this thriller was packed full of tension and drew me in easily with echoes of Stephen Soderberg hit ‘Traffic’ as well as aspects of cult TV series Breaking Bad.  However with an emphasis on secret operations and misleading information, especially from the point of view of Blunt’s character I’ll admit I found this confusing for a good portion of the run time.  The subject is nothing particularly new and doesn’t really go anywhere all that surprising, but with added support of a cool and mysterious Benicio Del Toro and the always enjoyable Josh Brolin … this at least had some solid performances to help me through a convoluted narrative.  Blunt is especially good in an emotional role that cements her reputation as one of the more interesting British actresses around.  I’d have really lik 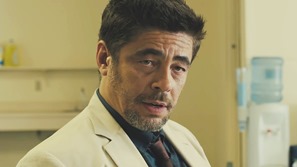 ed more action to offset the tension as it’s a movie where I was expecting something to kick off any second.  Tense moments such as a claustrophobic tunnel scene and a drawn out freeway journey certainly added to such expectations.  Yet much is left until the closing moments, which by then I was feeling more frustrated than entertained.

The movie however pulls no punches as far as showing the shocking lengths these drug dealers will go to, but with several confusing characters (not helped by similar Mexican names) and a pace that rushed through important plot details … this, although intriguing could have been so much better.