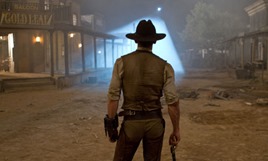 I haven’t a clue what’s taken me so long to get around to seeing this quirky-concept action adventure starring Daniel Craig as a mysterious stranger who wakes up in the wilderness with a strange device on his wrist.  Soon he attracts the attention of local shady big shot Harrison Ford who’s trouble-making son gets into a spot of bother with Craig.  Yet the two gunslinger’s problems are only just beginning when a race of aliens invade and begin abducting the locals.

It’s a solid idea and in the hands of Iron Man director John Favrau it’s fast and mostly fun, even if the pairing of the mumbling, serious Craig and the mumbling serious Ford grates a little (where’s the comedy side-kick?).  Thankfully we do get the lovely, if bland Olivia Wild (Tron Legacy) on hand as a mysterious beauty who seems to know Craig’s character even though Craig himself has amnesia.

The aliens however are horribly typical fair and not interesting; their big plan to steal gold woefully under-explored.  Yet the effects are decent, and with a great flying space crafts verses cowboys (and Indians) on horseback sequence, the action proved thrilling at times.  We also get some enjoyable supporting characters including a wimpy bar tender played by Sam Rockwell.  Yet for such a cool idea, I’d have liked this to be a bit more tongue in cheek, and could have done with better western-themed atmosphere other than the setting and failed to go anywhere I wasn’t expecting it to.  Probably the reason the movie wasn’t all that talked about after it’s initial release.

3 thoughts on “Cowboys and Aliens”