I usually like to do a blog post looking back at the year and the highlights it’s held both for me personally and on this blog as far as entertainment is concerned.  For a good portion of the year, from about March onwards I was all excited and geared up to see my favourite band, ‘Garbage’ of which I’ve already reported on here how it went seeing them at Brixton Academy in London in November – so the lead up to that was a big focus to my year.  However I did try and distract myself from this by playing various videogames and watching plenty of movies … reaching about 60 movies in total in the last twelve months (phew).  During this time my job and various other activities have kept me busy and of course I’ve enjoyed writing this blog as well.  So I’ll take a look back now and give my thoughts over the year that was 2015.

I started off the year with the enjoyable but not amazing ‘Maleficent’, enjoying Angelina Jolie’s turn as the iconic evil sorceress.  The first high point though for me was ‘True Detective’, which I’d borrowed off a friend … season one with Matthew McConaughey and Woody Harrelson which turned out to be riveting.  For some reason however I didn’t get around to season 2.  Then we came to the very impressive ‘Ex_Machina’ … my first taste of true science fiction this year that would turn out to be a great year for the genre.  I also very much loved ‘The Grand Budapest Hotel’ and found it a breath of fresh air and endlessly inventive.  The Oscar’s overshadowed much of February and it was good to see Eddie Redmayne picking up a statue for his turn as Stephen Hawkins in ‘The Theory of Everything’.  Also Birdman picking up best picture was it would turn out, marvellous considering it’s one of my favourite movies of the year.

I borrowed the much hyped but beyond the gorgeous visuals, disappointing ‘The Order 1886’ for the PS4 and thought it was a fun game that failed to reach it’s full potential.  Still worth it for the story and the graphics, especially if you can rent it or get it cheap …just don’t pay full price.  Then I experienced the underwhelming cash-grab that was ‘The Hunger Games: Mocking Jay Part One’ … which I’m hoping proves a better experience when I finally see Part Two.  A pleasant surprise however was the Sean Penn thriller ‘Gunman’, coming from the creators of Taken I was half expecting another poorly conceived rip-off of that classic movie … but no, this was hard-hitting action packed and well acted.

One of my major highlights for the year as far as games was concerned was the indie title ‘Ori and the Blind Forest’ …a superb, fiendish old school puzzle-platformer that was really addictive, had a beautiful Studio Ghibli-like art style and a large world to explore and get lost in.  I also enjoyed the comedy road movie ‘Identity Thief’, discovering the entertaining Melissa McCarthy for the first time.

Around this time I noticed I had reached a milestone, that of writing this blog for 8 years…wow.  I wrote a post reflecting on this and how I was feeling at the time.  I went through various observations of my life, work, dealing with depression that comes and goes to this day, and of the satisfaction this blog and my hobbies have given me when times haven’t been ideal.  I do venting and such from time to time as readers on here will be aware and hope you can excuse some of the more negative ponderings in between the movie reviews and gaming impressions.  Anyway on with the show…

‘John Wick’ turned out to be nearly everything I could want in a John Woo inspired action thriller and Keanu Reeves was back on blistering form.  Kevin Costner’s thriller ‘3 Days To Kill’ turned out rather poor and finally getting around to seeing ‘Donnie Brasco’, mob drama with Al Pacino and Johnny Depp was equally underwhelming.  Garbage’s new single and collaboration with singer Brian Aubert ‘The Chemicals’ left me with mixed feelings for a long while, and although I don’t consider the track amongst the band’s best work – it’s really grown on me over the last few months.  Nicholas Cage vehicle ‘Joe’ proved very interesting however and was one of his better recent performances, and Tim Burton’s subdued ‘Big Eyes’ proved decent if fairly lightweight for that particular director.

Also during April I was gifted with finally seeing the remarkable ‘Birdman’, from the increasingly impressive director Alejandro González Iñárritu (21 Grams, The Revenant) and also proved a unique return for Michael Keaton.  On the gaming front I got my teeth into the PS4 version of ‘Grand Theft Auto V’ and the much hyped ‘The Witcher 3’ on Xbox One …er, two games I still haven’t finished.  TV offered up the Breaking Bad spin-off ‘Better Call Saul’ which proved highly entertaining and I can’t wait for season 2.  The biggest disappointment around this time however was the news that ‘The Following’, one of my favourite shows was to be cancelled after the current season ended.  I was gutted but at least the final season 3 turned out to be excellent.

The summer blockbuster season kicked off in fine form in June with the exhilarating ‘Mad Max Fury Road’ which despite me not loving as much as some of my friends, I still got a kick out of.  E3 also dominated the gaming calendar around this time with plenty of exciting announcements for both the PS4 and the Xbox One.  Brit spy-spoof ‘Kingsmen: The Secret Service’ had it’s moments but didn’t impress me all that much … and Project Almanac was a fun yet forgettable time travel drama.

‘Terminator Genisys’ was one of the most purely ‘fun’ movies of the year and ticked many of my Terminator fan-boy boxes.  I don’t really care what others think of that movie.  ‘The Babadook’ also proved a refreshing horror movie that dealt with psychological trauma and the stresses of being a single mother with intelligence.  Around that time I also checked out ‘It Follows’ which was probably one of my horror movie highlights of the year.  Studio Ghibli animation ‘The Tale of Princess Kaguya’ also proved heart warming, magical and captivating just how a Studio Ghibli movie should be … and ‘Chappie’ was a highly enjoyable sci-fi actioner that once again made me a big fan of director Neil Blomkamp.   ‘Still Alice’ was a powerful story of one woman’s battle with Alzheimer’s and Julianne Moore rightly deserved her Oscar nod. 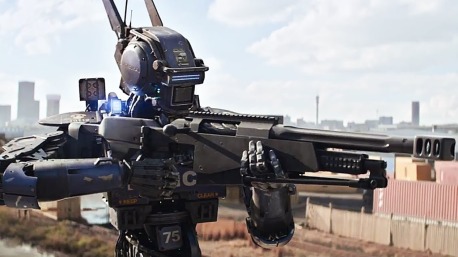 As I rolled into August I got around to seeing some very good movies such as ‘American Sniper’ which proved very powerful, and ‘Mission: Impossible Rogue Nation’ which was again another very exciting entry in the franchise.  Then we came to another great sci-fi drama in the name of Christopher Nolan’s ‘Interstellar’ which although at times confusing was full of wonder and amazing ideas backed up by amazing visuals.  ‘The Gift’ also turned out to be a surprising and very well acted psychological drama with a brilliantly complex Jason Bateman, whilst Iranian vampire drama ‘A Girl Walks Home Alone At Night’ proved visually striking but lacking in pretty much everything else.  Liam Neeson vehicle  ‘Run All Night’ also sadly showed that this gifted actor had found himself stuck in a rut of forgettable thrillers.

Although late to the party, I thought ‘The Conjuring’ was one of the best horrors I had seen in a long while, and Disney remake ‘Cinderella’ proved suitably enchanting whilst offering little new.  Crime thriller ‘The Drop’ seemed a suitable swansong for the late James Gondolfini (sob) whilst ‘The Avengers: Age of Ultron’ was fun but lacked that special ‘something’ to stand out in a crowded superhero market place.

As autumn and winter rolled around, disaster flick ‘San Andreas’ turned out to be a very enjoyable CGI-packed vehicle for Dwayne ‘the rock’ Johnson, and on TV some of my favourite shows came back, namely ‘Homeland’, ‘The Returned’, ‘The Walking Dead’ and ‘Fargo’, which have all proved excellent this season.  Dinosaur sequel ‘Jurassic World’ was a lot of fun and one of the better entries in the popular franchise, whilst Guillermo Del Toro’s gorgeous looking ‘Crimson Peak’ was one of my biggest disappointments of 2015 as I had hoped it would be another masterpiece by this talented director rather than the uninvolving style over substance it turned out as.  Thankfully Kevin Bacon thriller ‘Cop Car’ turned out quite the breath of fresh air and is well worth checking out.

November was for me, dominated by both seeing ‘Garbage’ and turning 40 (!!).  They were amazing live and I highly recommend you check them out for yourself if you get the chance.  I also visited London with my brother and pretty much that whole week will stay with me for a long time to come.  I hope to see the band again next year but don’t know if that will happen for sure yet.  Fingers crossed!  Yet I did get around to seeing a couple of movies as well, such as the intense, Oscar winning drama ‘Whiplash’ and entertaining animation ‘Minions’.  Yet one of the major highlights and probably my gaming experience of the year was finally getting my hands on ‘Rise of the Tomb Raider’ which was sheer gaming joy from start to finish and one of the best looking games yet on Xbox One.

So we come to December and much of this was focused on the imminent release of ‘Star Wars The Force Awakens’ which thankfully turned out a fantastic experience.  However aside from this movie I checked out comedy spy spoof ‘Spy’ with an again enjoyable Melissa McCarthy and ‘The Man From U.N.C.L.E.’ which proved enjoyable and visually impressive, but let down by a confusing plot.  I also finally managed to see Pixar animation ‘Inside Out’ which blew me away and was one of their best efforts yet.  Other than that ‘Assassin’s Creed Syndicate’ is one of the best entries in the franchise yet, with Victorian London a great setting full of atmosphere.

So there you have it, 2015 all done and dusted.  So what is left to say?  My end of Year Top Ten will be revealed on New Year’s Eve (this Thursday) and I’m already looking forward to compiling it.  There have been some amazing movies this year with some pleasant surprises.  My gaming calendar has been a bit underwhelming with only a small handful of titles truly impressing, but I am hoping 2016 fairs better.