Pixar seem to have been a bit hit and miss in recent years.  For every Monsters University or Toy Story 3, we’ve had a Brave or an Up … so I’ve actually felt more satisfied with Disney’s own creations like Tangled or Wreck It Ralph.  However we now come to this, Pixar’s latest and rather intriguing effort.

This follows the simple story of Riley, an 11 year old girl who is uprooted from her cosy existence in Minnesota when her parents move to San Francisco.  It’s not long that she begins to pine for ‘back home’ and struggles to fit in at her new school.  At the same time, we get a look inside young Riley’s head where four little beings are hard at work, and represent her varying emotions; joy, anger, sadness, fear and disgust.  It’s not entirely a new concept but done with no end of imagination as we see the four beings squabble and work hard to get Riley through her day as different aspects of her personality and memories come under threat form current circumstances. 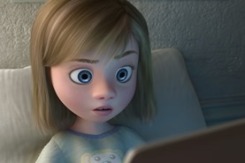 I found this incredibly entertaining and it was really well executed.  The idea of different islands representing important parts of Riley’s personality was ingenious (imagination land, goofball land, family land etc.) and with Pixar’s wonderful style and gorgeous animation, it was a world brought stunningly to life.  The emotions that run Riley’s head were also very well realised, especially Joy who tries to make good of every situation and also Sadness who has the uncanny ability of bringing doubt and unhappiness into everything, whilst still managing to be likeable.  These two emotions become the main focus of the story as Riley faces different obstacles and I loved where it went, bringing in imaginary friend Bing-bong and various other funny characters (the ‘my hat’ police, the workers who tidy up the deep memories archives, the imaginary boyfriend).

For an animated movie I found this especially creative and it didn’t dumb down the over-arking message for a kiddie-friendly audience.  I got quite emotional towards the end, and this was both thought-provoking and feel good, with some themes really hitting home.  One of Pixar’s finest.  Essential stuff.

3 thoughts on “Inside Out”