Well, it was a long time coming but on Monday the 9th of November 2015, I finally got to see my favourite band Garbage in concert at Brixton Academy, London.  The near-sold out show was such an incredible experience that putting it into words isn’t easy.  I had a long wait, queuing up for a few hours before finally finding my seat and waiting again.  There was a long wait until the support act The Dutch Uncles came on, who were enjoyable even if their music seemed a bit ‘samey’.  However it was a good indication of the decibels I was about to be assaulted with.

Following this was a really cool intro, that involved a white sheet dropping to cover the stage and surrounding area entirely, then an archival video to the tune of Garbage b-side Alien Sex Fiend showed footage of the band back in ’95 along with a commentary on their origins in Madison, Wisconsin along with news footage of Princess Diana, OJ Simpson and the beginnings of the Internet.  This all then built up to the four members being presented in tall large images one after the other.  Then it was time for the first song, Subhuman which was performed entirely behind the sheet with the members only visible as silhouettes.  Very bold and utterly ingenious.  As this occurred I recalled actually shaking with excitement, an overload of emotions and feelings that I’ll admit brought tears to my eyes.

A picture taken by my brother from where we were seated

I won’t go into too much detail of the show which spanned almost two hours and covered approximately 23 tracks spanning the entire first album and nine b-sides – topped off with an encore that threw in a couple of tracks off other albums which were Cherry Lips and Push It.  Throughout the guys and Shirley were on fine form – for a 49 year old Shirley Manson’s energy was intoxicating – she jumped and danced and head-banged around the stage like a woman half her age, and it was incredible to witness.  In between some songs she told stories, such as her strong feelings regarding the LGBT community as well as funny anecdotes like how cold she was walking to Smart studios to do some recording, and the frozen hairs in her nose inspired her to write the song Driving Lesson (because she wished at that moment she could drive).  Little moments like that and the rather emotional story of Kick My Ass detailing the tragic suicide of song writer Vic Chestnut made the night even more special. 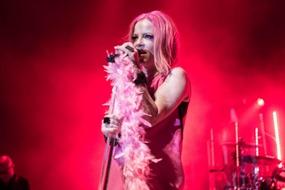 Highlights for me musically were performances of Not My Idea (really got the crowd going that one), Fix Me Now (sounded amazing), Only Happy When It Rains, Stupid Girl (excellent light show), Kick My Ass (a beautiful song that again got me very emotional) and also Cherry Lips (a real crowd participation anthem).  Less effective, due to the immense sound and volume were As Heaven Is Wide (Shirley seemed to get drowned out by the guitars and drums) and to an extent Vow which felt too harsh and intense to completely appreciate.    But I’m a concert novice and it probably was too loud and over-powering at times for me … yet the good seriously outweighed the not so good, and the high production values, that glorious intro, Shirley’s sheer exuberance and various brilliantly delivered songs overshadowed any quibbles.

Garbage blew the roof off Brixton on Monday and the whole event won’t be something I’ll get over for a very long time.  So thank you Garbage – you made this long-time fan very happy indeed.

1 thought on “Garbage and a dream realised”