Yeah I know to the majority of my readers, that’ll be ‘Fall TV goodness’ but I’m in the UK and well, that’s just how I roll.  Starting pretty much from now, there seems a plethora of exciting TV shows coming my way to fill up my nights with quality drama.  First off we have the return of The Walking Dead for it’s sixth series.  This very consistent and very well made show has never disappointed and the characters and storylines remain as compelling as ever.  Next up will be the return of er…The Returned, a French horror drama about a group of dead people who return to their hometown seemingly unaware that the people they love have been mourning their deaths for several years and had only just began to rebuild their lives.  Season One was excellent with some great characters and a quality, eerie atmosphere.  So I’m looking forward to whatever this season has install.

Last week also saw the latest season of acclaimed drama Homeland hit UK screens and going by that first episode, it looks to be another gripping season ahead.  Homeland has certainly been one of the best shows in recent memory and the real-world relevant backdrop of terrorism adds a great deal to the impact this show can have.  Starting this Monday too, is the second season of that surprise hit TV spin-off Fargo, based on the Oscar winning Coen Brothers movie of the same name, this time set a number of years before season one.  I don’t entirely know what to expect, but last season was so damn good, it should be pretty unmissable.  Now add to this I’m still catching up with Game of Thrones which has been fairly consistent and gripping through the almost three seasons I’ve watched thus far, and that’s a lot of TV to cram in.

In other news, I’m gearing up to see my favourite band, alt-rockers Garbage on the 9th of November in London, a very long-awaited and never before realised dream for me personally.  Th 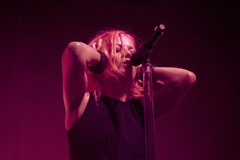 e highly anticipated 20 Years Queer Tour kicked off stateside on 06 October and runs until end of November with a final date in lead singer Shirley Manson’s hometown of Edinburgh.  I’ve been watching videos on Periscope of them backstage, checking Facebook fairly religiously and probably doing my head in (and everyone else’s) during the build up – but dammit, am I excited and looking forward to it.  In preparation I got myself a copy of the re-mastered edition of their debut album in a deluxe version on CD, as well as buying a couple of t-shirts and other bits of merchandise.  Hey, I may never see them again as it’s not the easiest thing for me to arrange or make happen … so why not go all out?  I’m intending to take some photos and possibly record some footage so maybe I’ll put some stuff on here once it’s all over with.

In recent posts I have remarked on depression and difficult times and I’m trying my best to steer away from this now.  I have some amazing things on the horizon that should and will give me a different, more positive outlook on life.  I think I’ll always be prone to negative thinking and dwell on the past and on certain people in my past, but looking to the immediate future …. it’s more positive than I sometimes let myself believe.  My 40th birthday is also right around the corner and it will mark a milestone in my life and a step in the right direction, and I need to see it that way.  I need to look ahead with a clearer outlook and not focus on the past at least not as much, anymore.