When Liam Neeson defied expectations and proved a credible action star in the breakout hit Taken, I couldn’t wait to see what would come next.  However what we did get were a series of thrillers that all seemed to come from the same blueprint, delivering entertainment of rapidly deteriorating quality … Taken’s own sequels a prime example. 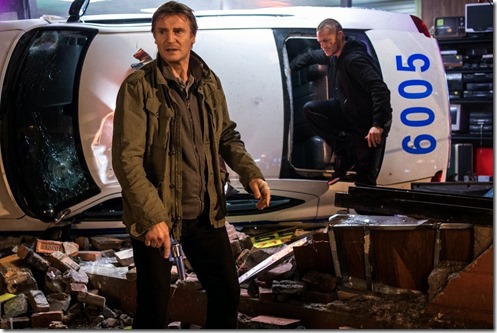 However I came to this fairly well reviewed revenge thriller with a degree of optimism because well, Neeson is still a solid screen presence and with the right script can really deliver the goods.  Sadly then this wasn’t the case here.  Neeson plays a down on his luck mobster, estranged from his son and still hanging out with his gangster friend Ed Harris.  Yet one night Ed Harris’ loose-cannon son gets in a sticky situation with some Albanian drug dealers and is soon involved in murder – that get’s witnessed by Neeson’s limousine driver son.  Neeson then has to protect his only son from this unhinged hoodlum that he’s forced to kill, which pisses off old friend Harris – and so sets forth a night of retribution and well, a lot of running.

Slightly convoluted story aside, the concept here is decent, and the performances, especially Harris and Neeson are not bad.  RoboCop remake’s Joel Kinnaman is also passable as Neeson’s clean-cut son … but the big let down here is the direction from usually commendable Jaume Collet-Serra (the underrated ‘Unknown’ and cult classic ‘Orphan’).  He chooses to shoot the whole movie like a rapidly edited pop-video that really didn’t suit the gritty, realistic tone and spoils pretty much every attempt at a good moment.  A car chase is dizzying and just not enjoyable to watch.  Shoot outs get tiresome very quickly, and even quiet character moments are awash with camera angles that don’t stay in one place for more than a second.  The writing is also pretty lazy and get’s rather silly at times just to help the plot along (leave the hit man alive?  Really??).

Some plot elements like how Neeson won’t let his son fire a gun and the father / son bonding or the friendship between Harris and Neeson, helped give the movie some depth – and in better hands, could have made for much more memorable fair (Michael Mann comes to mind, considering we get a steal of Heat’s famous coffee shop scene).  But no, this was just sloppy style for the sake of sloppy style, that took any potential and ruined it.

1 thought on “Run All Night”