I must admit I’m becoming quite an admirer of South African director Neill Blomkamp’s brand of sci-fi action thrillers.  His debut, the acclaimed District 9 certainly impressed, and his follow up the underrated Elysium was one of my favourite movies of recent years.  So sitting down to this latest, albeit somewhat more personal effort I’ll admit I was excited. 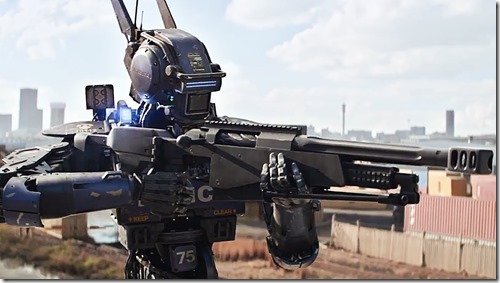 A robotics scientist at a company that builds and runs an android police force, creates the first true artificial intelligence and installs it in a test robot fresh off the battle field.  However on-route home to do more tests, the robot is stolen by a group of desperate thugs who subsequently adopt it and name it Chappie.

Set in a near-future Johannesburg, Blomkamp’s movie stars Slum Dog Millionaire’s Dev Patel as the scientist, Hugh Jackman as a rival scientist and Sigourney Weaver as the head of the company.  Playing against type, Jackman is good fair and seems to be loving time out from Wolverine.  Weaver on the other hand get’s a rather limited, thankless role considering her Sci-Fi credentials, so it’s left up to Patel who is very good and a bunch of lesser-known but intriguing co-stars to carry the movie around a brilliant creation.  Blomkamp regular Sharlto Copley (The A-Team, Maleficent) does a stellar job voicing the robot, instilling a naivety and energy to the character that really brings it to life.  We follow Chappie’s exploits from frightened child to becoming a hanging-with-the-homies gangster, whilst all the time being manipulated by gang leader Ninja and befriended by surrogate mother ‘Yo-Landi’.

Think a cross between eighties classic Short Circuit (Number Five is alive!) and genre favourite RoboCop (not the lacklustre remake) with some blatant borrowing of that movie’s key ideas even down to an Ed 209 look-a-like.  The story’s most fascinating aspect however; Chappie’s learning felt rushed, for a robot who has to pretty much grow up before our eyes (…how’d he know lying?), and the clichéd thugs / locales were straight out of the post-apocalyptic handbook.  Yet Blomkamp threw in enough stylish action and energy to keep this viewer smiling and entertained throughout – and that ending was sheer class.

On this evidence, I can’t wait to see what he does with Alien.