Following up Hayao Myazaki’s swansong The Wind Rises and perhaps continuing the brittle future of the famed Japanese animation house, this latest offering was a nerve-racking prospect to say the least.  In Myazaki’s absence could Studio Ghibli still deliver? 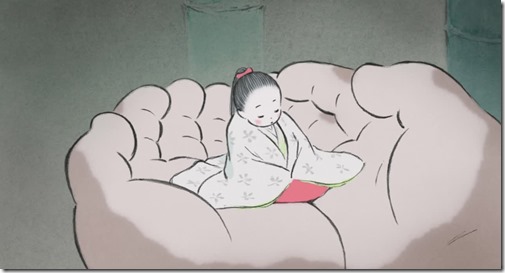 Isao Takahata (Grave Of The Fireflies, My Neighbours The Yamadas) has created a truly breath-taking example of traditional hand-drawn animation.  The whole movie is presented in a beautiful, minimalistic water-colour style that is really something to behold.  The story (based on a folk tale) follows an ageing bamboo cutter who one day discovers a tiny girl inside one of the bamboo stalks.  Taking her home to his wife, they quickly decide to raise the girl as their own.  Then rapidly and magically she grows into a beautiful young woman.  However on realising that his surrogate daughter should be treated as a Princess rather than a lowly country girl, the bamboo cutter sets forth a plan to have her married off to a wealthy man and truly realise her potential – and his own dreams of wealth. 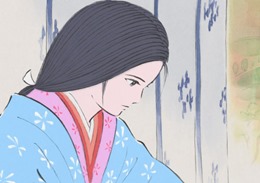 This is a very well observed movie, full of that Ghibli character I’ve come to adore (with plenty of fascinating Japanese historical detail) and the story reminded me somewhat of classic Oscar winner The Last Emperor in Kaguya’s journey from free-spirited child to forced-on-her palace rituals.  It’s at times whimsical and full of comical and interesting characters (the four suitors especially) and offers up a gentle love story as well as a powerful coming of age for the title character.  It’s probably too long for what it is, and plods along at times, yet makes up for this in it’s sheer artistry and leads to an ending that I’m not afraid to admit, got me quite emotional.

I was slightly underwhelmed by The Wind Rises, but this was a gentle return to the magic and heart of Studio Ghibli.  Another gem from what was (if rumours of their closure are to be believed) one of the finest animation studios ever conceived.

2 thoughts on “The Tale Of Princess Kaguya”