Nicholas Cage has had a bit of a bad rap lately with his wealth of commercially and critically underwhelming roles in mostly forgettable movies.  This is one that seems to have garnered him better reviews however. 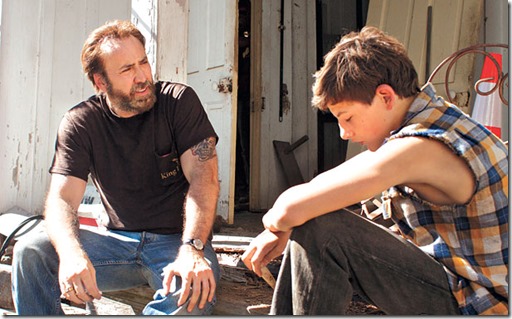 Cage plays Joe, a boss in a logging firm who employs a local teenage kid looking for work.  Overtime the two form a bond and soon Joe realises that the kid’s drunken father may be hitting him and the kid’s mother.  Yet Joe has enough problems of his own – should he get involved?

A thought-provoking story slightly let down by what appears to be first time actors in key parts.  Tye Sheridan who plays the kid is not bad and fairly convincing, but I wished the toothless, abusive father had been portrayed by someone with a bit more acting-chops, to add some depth to his character.  Speaking of depth we get to know next to nothing of Joe’s background other than a stint in prison – where does he come from?  Why doesn’t he appear to have any family or friends?  I’ll always like Cage however, and here he does a decent job with a fairly basic character.

I came away feeling this was a poor man’s Gran Torino, the seasoned veteran actor and amateurish co-stars bringing on a serious case of Déjà vu – but it has only a smidgen of the emotional impact of that Clint Eastwood classic.  For fans of Cage though, this was one of his better performances in recent memory.