So it seems to be another acclaimed actor’s turn to do the whole Taken thing with this Paris set thriller written by Luc Besson and directed by McG.  Costner plays a CIA agent, who returns to Paris after a job goes wrong.  Sound familiar yet?  Oh but wait, Costner’s character has brain cancer and only an experimental drug and one last contract can save his life.  Does he trust the sexy femme fatale CIA agent offering him a miracle cure, or does he settle for the quite life with his estranged wife & daughter?  What do you think? 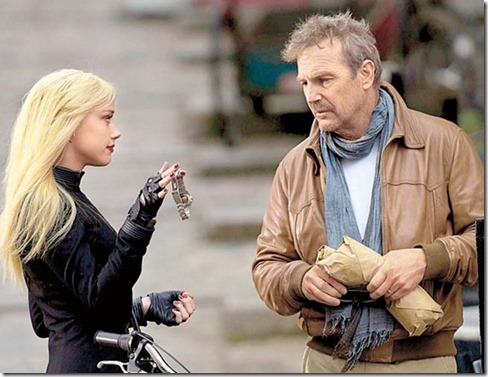 Costner handles the action well but also has to deal with a script that awkwardly juggles comedy and family bonding (let’s teach the daughter how to ride a bike, and yes there’s an African family squatting in Costner’s apartment…).  It’s a strange tone for sure considering that some of the action is pretty full-on, fairly violent and intense.  Amber Heard’s CIA agent is cool, mean and sexy but looks like she’s wondered off the set of an anime movie, lending little other than eye-candy and a lot of pouting.  Oscar winner Hailee Steinfeld from True Grit is also quite wasted here, but tries her best.  Thankfully then Costner who is probably mostly known as a supporting actor these days plods his way through very silly material fairly unscathed.  But where’s the danger?  Why doesn’t the daughter or ex-wife ever get kidnapped?  And what’s the point other than for Costner to take a drug he accepts purely on good-will from a very dodgy woman with a gun?

With a couple of exceptions, these kind of European action movies are getting very tired, how the once talented Luc Besson pimps out script after script to once major actors clearly just after a pay cheque, is bordering on insulting.  We as movie goers deserve better, and all the talent involved can certainly do better.