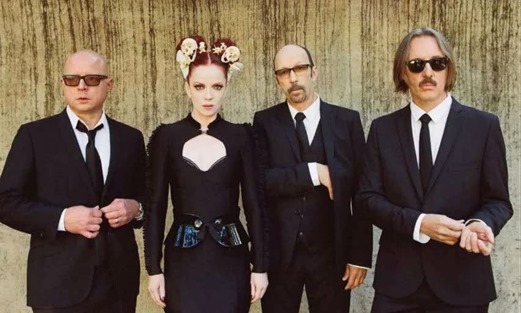 I’ve reported on here about my near fanatical obsession with the alternative-rock band ‘Garbage’ many times and thought it high time I do a more detailed post on how much I enjoy and appreciate their music and the band as a whole.

I first got into these back in 1996 when I was on the look out for a band with preferrably a female lead singer that was something a bit different in the wake of the Brit pop explosion that seemed to have defined part of the nineties for me.  I had been into the usual bands like Oasis, Suede, Pulp and Blur, and had a soft spot for the band Sleeper for a while.  Then one evening I was listening to Radio One and the Evening Session with (I think) DJ Steve LeMack, and on came this very different and interesting sounding song.  It was called ‘Queer’ by some band known as Garbage.

I knew nothing about this three parts American one part Scottish four-piece at the time but was instantly hooked.  I went out and purchased the CD single of Queer and soon after the band’s début album ‘Garbage’, which became a regular on the CD player for a long time afterwards.  Their sound was something special, you could say a combination of grunge-rock with a slight electronic / heavilly-mixed overlay, and it turned out to be exactly what I had been looking for.  As time passed I began to realise that this wasn’t just some band that would disappear, and they were clearly making their mark on 90’s music in a way many other bands just seemed very tired and boring (with several disappearing into obscurity, such as Elastica).  Garbage were like the rebels of the time and I was in love.

A big part of the appeal was of course Edingburgh born, flame haired lead singer Shirley Manson.  With that iconic look, she was the bad girl every guy wanted to be with and every girl wanted to be like, and she had attitude to spare – exactly what you’d want in a rock band’s front woman.  Add to this the producing talents of three seasoned veterans, Steve Marker, Duke Erikson and Nirvana, Smashing Pumpkins and Green Day legend Butch Vig.

As part of this tribute, I’ll take a closer look at the five albums they have released to date and offer up my impressions on how each one has differed slightly, how they have tackled various styles and delivered some of the most interesting and enjoyable music I have ever treated my ears to, with some video examples along the way…

This electrifying debut was like a band trying out various ideas, just starting out, bold and daring and experimental, yet able to come up with a bevy of instantly memorable rock anthems like ‘Only Happy When It Rains’, ‘Stupid Girl’ and ‘Vow’.  With this they proved themselves as a breath of fresh air, with a distinctive sound and voice, ready to take on the world.

I remember waiting for this follow up to one of my all-time favourite albums for what felt like an age, and oh boy did it not disappoint.  A bold and focused style, like the band had ‘found their groove’, a perfect blend of grunge-rock and pulse-pounding electronica, especially in tracks ‘I Think I’m Paranoid’ and ‘Push It’.  It also fitted in effective power-balads like ‘The Trick Is To Keep Breathing’.  This was a band brimming with confidence.  Opening track ‘Temptation Waits’ remains a power-house start to an album that is still arguably the best work they’ve ever done.  Got the band a Grammy nomination amongst several other accolades.

This felt like the band were settling into their unexpected commercial success but perhaps also falling into the trap of conforming to an industry that preferred immediately catchy and upbeat pop songs.  Although reportedly a difficult production for the band, this was still critically acclaimed but a slight come down sales-wise.  Trusted fans maybe found it too commercial and regular music listeners couldn’t easily define it.  For me it still captured the professionalism of the band with stand out tracks like ‘Cherry Lips’, ‘Shut Your Mouth’ and ‘Till The Day I Die’.   Shirley’s vocals are on amazing form, and the album remains confident, but stylistically not quite as unique as their previous efforts.

Apparently creative freedom issues and touring fatigue made this another difficult album.  A bold and daring change of style for the band and turns their music into more of a pure grunge-rock sound than the experimental alternative-rock of the band’s origins.  Attempting and succeeding in a darker more edgier tone yet still belting out instant hits like ‘Why Do You Love Me?’ and ‘Bad Boyfriend’.  Features possibly some of the band’s best song writing (with a strong, politcal vibe), and even gets semi-autobiographical with the powerful title track.  Was sadly their last release before a long hiatus.

‘Why Do You Love Me?’ official video

Following this singer Shirley Manson tackled an acting career, appearing as a T1001 in the underrated TV series Terminator: The Sarah Connor Chronicles and the others went back to producing, with Butch Vig doing the honours on albums for Green Day and Foo Fighters.  Shirley also attempted a solo album which was sadly turned down by her record label.  The hiatus was initially blamed on touring fatigue and the band just wanting time away from each other, but it came out later once the band announced they had got back into the studio to record new material, that record label interference and trying to mould the band into a particular type caused them to step away.  They finally decided to go independent and self-release through their own label ‘Stun Volume’.  This of course meant that commercial acknowledgement was probably going to remain in the past, but also meant they could make the music they wanted to make, on their terms.

Very long awaited and to be honest, I didn’t know what to expect.  Everyone had aged, music had changed (and not for the better…), could Garbage still do it, still make me feel what I felt all those year’s previous?  The answer was a resounding ‘yes’, and this CD is probably the most over-played CD I have ever brought with songs that instantly grabbed me, some growing into firm favourites, and all seeming to define a band that had matured and developed in all the right areas.  Shirley’s vocals sounded better than ever.  The music had returned to the complexity and experimentation of the début, retained the high production values of ‘2.0, whilst throwing in the catchy pop/rock of ‘Beautiful and the heavy guitars of ‘Bleed to deliver such stand outs as ‘Blood For Poppies’, ‘Automatic Systematic Habit’ and ‘Battle In Me’.  A band embracing their own style and identity.

‘Battle In Me’ live on David Letterman

Following this they also had releases for the annual ‘record store day’ event and collaborated to good effect with indie band The Screaming Females as well as grunge rocker Brody Dalle.

‘Because The Night’ official video

I think it’s a real shame that they don’t get the recognition they deserve, their skill at writing and producing songs clearly evident in every second of their work.  They are also a viable and impressive live band with the iconic lead singer and the rocking tunes, with some of the classics tailored and updated for performing on tour.  Their energy and enthusiasm seeing them perform is infectious, and well, I just wish they got talked about more and got the rewards and accolades they used to enjoy.  Yet the music industry has changed and Garbage has had to change with it.  They are now outsiders to the mainstream but with a loyal army of Darklings waiting on their every word and every release, they can still enjoy the appreciation of a committed fan-base.

They continue to be a strong presence on their official Facebook page and Twitter as well as keeping fans up-to-date on their Official Website.  2015 marks the twentieth anniversary of their début and the band plan to tour and release a sixth studio album during the year to celebrate.  I for one can’t wait!

5 thoughts on “Garbage – a tribute”