Two things sold me on seeing this … the excellent trailer and actor Jake Gyllenhaal, one of my favourites.  Now in recent years he’s slipped into the mainstream with roles like Prince of Persia and Source Code, but his routes are in unusual indie flicks like Donnie Darko.  This suits that heritage well and has him playing Louis, a somewhat unhinged loner, seeking out employment but not having much luck until he stumbles upon a highway car accident.  There he witnesses a group of freelance guys (headed by Bill Paxton) who rush to crime scenes or accidents in the hope of catching something on video.  They then sell it to the news network that will pay the most.  A potentially lucrative career opportunity Louis believes and is soon buying a video camera  in hope of making a name for himself. 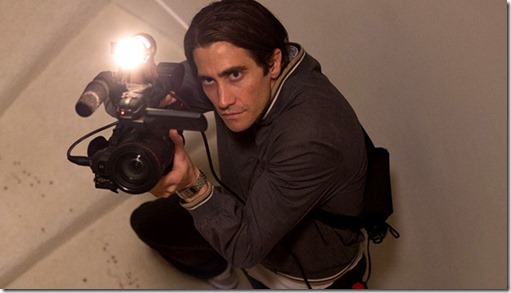 A clever and interesting concept with a brilliant turn by Gyllenhaal, who plays Louis with creepiness and menace beneath a brittle facade of friendly and charismatic.  I enjoyed watching him go to extreme lengths to get the sort of footage his rivals wouldn’t dare, and the slow burning uncertainty of what might happen next kept me glued.  Paxton is decent but a bit under-used but good to see this 80s / 90s veteran still turning up in things.  Better is Rene Russo playing the perfect sultry older-woman.  The movie has a strong similarity to Robert DeNiro classic Taxi Driver even if Louis isn’t as appealing as Travis Bickle – but the mood and the isolation from normal society is the same.  It also has a killer car-chase towards the end which took my breath away.

The plot does take a bit of time to hit it’s stride, and that ending was anti-climactic, and well, the whole show could have been even darker.  For fans of Gyllenhaal however, and if you’re after something a bit different – you can’t go wrong with this.