I thought the last Captain America movie was the better of the several origin tales leading up to Marvel Avengers Assemble.  The World War II setting, the fact Steve Rogers goes from a wimpy rookie to a super soldier (and the special effect used to fool us…) as well as a great turn from Hugo Weaving as Red Skull all made for a top class piece of entertainment.  So you ask, where to go now ol’ cap is in the modern world?  Well how about an attack on s.h.i.e.l.d and a conspiracy where the agency he trusted suddenly turns on him? 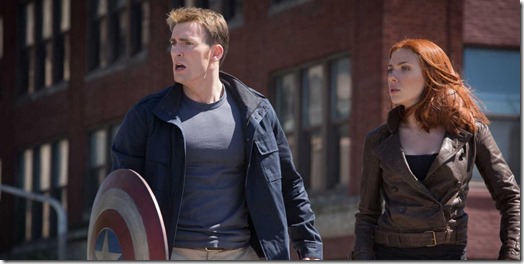 Scarlett Johansson is here as the sultry, bad-ass Black Widow and well, kicks all sorts of ass, despite a dodgy fake tan.  Oh and this time we get a lot more screen time with Samuel L. Jackson’s cool-as-ice Nick Fury, who gets his own actions scenes for a change.  Villainy is in the form of The Winter Soldier, a tough as nails enemy with a metal arm (!) who is every bit the match for Chris Evans’ increasingly llikeable Captain.  What follows are a series of bombastic encounters, a stand-out showdown on a freeway, very impressive effects, surprisingly vicious hand-to-hand combat (with some martial arts thrown in), and a keep you guessing plot.  Robert Redford plays one of the senior guys of s.h.i.e.l.d. but is looking his age, and Anthony Mackie is pretty cool as Falcon, even if he seems to come out of nowhere.

As a follow-up this packed quite punch in the action stakes and gave us some good character development with Captain America facing his past, and Nick Fury questioning his allegiance.  Chris Evans is still perfect and handles the action well, as does Johansson (prrr…).  A quality sequel, and made me thirsty for the next Avengers – surprising considering all this comic book stuff was starting to get a bit tired.