On initially seeing the trailer to this true story set in WWII, the casting of George Clooney, Matt Damon, John Goodman, Bill Murray and Cate Blanchet made me eager to see it.  I missed it at the cinema but immediately took the opportunity when it arrived for online rental.  Clooney who also directs is a soldier and professor who puts together a band of art historians and curators to journey into occupied France and Germany on a mission to take back stolen works of art. 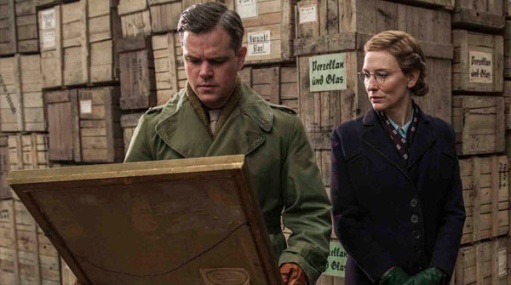 Blanchet plays a woman who works for the German army but is secretly in league with the resistance who stumbles upon the Germans stealing priceless paintings as the war draws to a close.  Historically this was fascinating and the fact Hitler was after this art is quite eye-opening, and made me want to read up on more of what was going on back then.  Performance-wise this has an impressive roster of faces, although I found only Clooney and Blanchet stood out (her French accent is very good, and Clooney deliver’s emotional speeches brilliantly).  So what was the likes of Murray and Goodman doing here?  Of course I’m not expecting a comedy, but their presence just felt wasted, as neither got what you might call time in the spotlight. This was also a film of padding, with a few scenes just there and not really adding a great deal to the narrative (the smoking scene…).

On a plus this is a great looking movie.  Production is top-notch recreating the era convincingly and the set design and cinematography are both impressive.  The flirty pairing of Blanchet and Matt Damon was also interesting.  For a gentler take on events in WWII this was engrossing and at times quite moving.  I was left wishing there had been more danger and tension, but for the most part this was still good entertainment.

3 thoughts on “The Monuments Men”