This is the last post I’ll be writing on this heavily hyped and popular game now I have had more time to really get to grips with it.  So there are a few things I’ve noticed and a few things I wish had been implemented better … or at all.

Ubi Soft have done a great job with this recreation of Chicago and its a blast to explore, especially with all the extra side missions and wealth of people and things going on. What did puzzle me was the amount of bus shelters – but not a single bus! Also why aren’t there any Taxis in this city? Just seems like a complete oversight by the developers. Also strange that Police seem to be absent for the most part until you do some sort of crime. Shouldn’t they be on patrol anyway?  Then the pedestrians which at first glance are well done and individual, it soon becomes apparent that there are a ton of repeated lines of dialogue like ‘what is going on in Chicago’ and ‘she has a crazy perfect ass’ but spoken by different pedestrians and in different areas of the city. A tad lazy for an apparent next-gen experience.

The weather system is at first impressive and I can’t fault the thunder / rain effect. Even the slight smoggy look at certain times of the day is impressive, but wouldn’t it be cool if there were other effects catered for, like snow? As seen in The Division, but perhaps time of year is a factor, so a wintery sequel? Hmm.  Building interiors lack some detail and I think they could have had a few more areas you can go inside and explore. It doesn’t feel as interactive as GTA V and that was a game on last-gen hardware. Oh and why is this city, like many open world games completely unpopulated by children and animals? I get it, we don’t need to see a child run over by a crazy gamer or shot at point-blank range, but hey – not very ‘real’ either, is it? Couldn’t it be implemented so that such incidents would have a much bigger impact on your reputation compared to regular pedestrians? Just a thought. 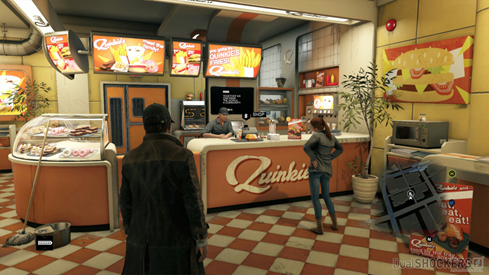 The cash system is far too generous. I haven’t once during the time I have played, lacked money – I either pick it up from fallen foes, steal it off pedestrians or its just plain given to me … lots of it. Makes the whole buying weapons, pills, clothing part of the game a bit boring if its so easy to come by. Oh and as for weapons, getting hold of high powered items like the grenade launcher, very early on, makes many of the missions rather easy. Shouldn’t such hardware get unlocked the more I progress, or as I have mentioned, wouldn’t more of a lack of cash make such cool weapons worth ‘saving up’ for etc… with cash earned perhaps during side quests? I actually had the grenade launcher around the start of the game. On the subject of weapons, how about customization and individual weapon mods, like perhaps a silencer on a sniper rifle…?

The game has some very cool ideas though. The way you can hide in your car following a police chase feels very cop thriller territory, and the story itself, whilst very serious in tone, has the feel of a cool high tech TV series or a movie, with characters that feel real – to me at least. I love profiling pedestrians for some of the weird job titles etc. Also getting hacked during my game is very clever and fun to track down the hacker and blow him away…lol. Some have said the driving is a bit off. I disagree. This depends on the car you use, and feels believable to how real world cars react, as in over-powered ones spin out very easily etc. The bikes are awesome, by the way.

That extra six months of development, I do wonder where it went . . was it getting the core gameplay principals just right, or adding silly (but fun) diversions like digital trips and cash runs? Personally the time given to such mini games could have been better put to use on limiting the repeated dialogue, giving us buses and taxis to ride (not just trains…) and general polish (yes the game has bugs…). Oh and don’t get me started about the radio… firstly no stations and no DJs? Granted this is Ubi Softs first stab at this sort of GTA-like game, but really? It’s been a stable mate of this style of game for years.

So for the inevitable WD #2 I hope we don’t just get more of the same, but Ubi Soft dedicating themselves to delivering a fully immersive, open world experience with all these little details intact – believe me they matter.