Note: this article has now been updated (see below).

So, the most anticipated game of the year is finally out, after a stunning reveal at E3 2012 and following controversy over it’s apparent downgrade in graphics since then … what do we as consumers actually have now it’s available to buy? 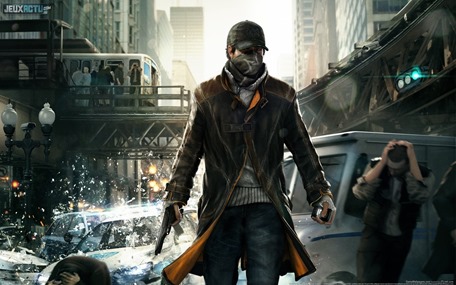 A big, at least visually, disappointment.  The game looks last-gen with a few better textures and arguably impressive night time rain / wet road effects … but visually overall it does not impress me.  I don’t currently own the game and am not sure if I will (but I may due to it’s unique gameplay alone) but as a much hyped title, the six month delay and the e3 reveal we are left as consumers with little more than a poor-mans GTA… and stylistically it doesn’t look much different to GTA 5 which was a real show stopper on last gen hardware.  For a game also being released on the PS4 and Xbox One – it is nothing special.  Textures, roads and buildings seem to lack a three dimensional appearance … what, no bump-mapping?  Why does everything look so flat and square?  It’s like a game from the early 2000’s.  That would be forgivable then, but we have come on considerably since.  For me the best looking open-world GTA-clone in recent memory was Mafia II, which looked amazing, especially inside buildings, with very impressive detail and great lighting and shadow effects.

I hope when I finally get hold of the Xbox One version I will see something I am not currently seeing … but for now consider me rather underwhelmed.

Some gameplay of the Xbox One version from You Tuber user ‘optic midnite’ can be seen below.  Now don’t get me wrong, the game looks fun – but after all the hype and the suggestion this was going to be a true ‘next gen’ show-piece, I’m not entirely sold.

On the new consoles and even on PC this doesn’t cut it, and considering what has been achieved I can only presume the more detailed hacking mechanics have prevented the developers really pushing this on a visual basis – like too many things going on in the background?  Either way the fact we have sub-hd resolutions on both the PS4 and Xbox One (worse for the XB1 being at 792p) is baffling if these consoles are meant to be considerably more powerful than hardware that’s now eight years old (PS3 & 360).

(Updated: 31/05/2014):  Well I went and purchased Watch Dogs for my Xbox One and what are my final hands-on impressions?  Much more positive.  I’d go as far to say this is probably the most interesting game I have so far on the XB1 and certainly one of the more unique open-world games I have played.  To touch on the visuals firstly, internet videos, comparisons between PC, XB1 and PS4 do this game no justice.  Its beautiful and very detailed … and goes for a very realistic interpretation of Chicago, with an effective day / night cycle and wonderful weather effects.  The wealth of people in the game are also believably animated, do interesting things to further enhance a living world atmosphere such as once I walked by a couple who the woman was throwing bags over a balcony much to the upset of her disgruntled boyfriend … and another time I passed some street rappers, and another a couple posing for a photograph being taken by another person.  Impressive.  Lighting is first class as is water and shadows and other details like tires on cars you can actually burst by shooting them, or realistic glass shatter as you plough into bus stops with your vehicle.  Some have said this game doesn’t look as good as the PS4 version, but from what I have seen, there is hardly any difference at all, and all the details and effects are intact … so XB1 owners hesitating over the reduced resolution … don’t worry one bit.

The game itself seems a very intriguing techno thriller, such as The Girl With The Dragon Tattoo, and immediately grabbed me, all to do with main character Aiden Pierce searching for revenge after an attempted murder goes badly wrong.  It’s a great initial hook to pull the gamer in, and made me really want to unravel all the story had to offer,  The hacking is of course the big draw and it’s so well implemented that it makes the usual sneaking you’d find in games like Splinter Cell and Metal Gear Solid seem refreshing and new, and add to this first rate gunfight / shooting mechanics as well as well done driving and lots of vehicles and weapons to find … this seems the perfect marriage between the old and new to create something truly next-gen … at least in terms of giving the player a new take / spin on tried and tested game play.

I’m still early into this but so far many of my reservations and fears have been quashed.  Although some reviews have said the missions get repetitive, I am still very eager to see and play more … so would say this will be my primary game to play for a while yet.