I would generally say, you can’t go wrong with a movie from sibling directing / writing duo Joel & Ethan Coen.  Their brand of often darkly comical thrillers, mysteries and just plain wacky comedies have earned them many accolades and have them standing tall as two of the best film makers around.  That’s not to say they don’t sometimes perplex me, with the underwhelming Intolerable Cruelty and the bizarre A Serious Man … but also like this Oscar winning effort from 1996 their movies deserve multiple viewings and like me, you may not necessarily ‘get it’ first time around. 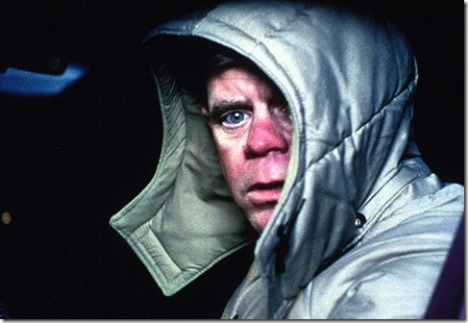 William H Macy plays a car sales man in money troubles, who thinks his only way out is to have his unassuming wife kidnapped so her rich father can pay the ransom.  Enter kidnappers Steve Buscemi (kinda funny lookin’) and Peter Stormare, who pretty much screw up the whole deal.  This snapshot of Minnesota, South Dakota life and their inhabitants pokes fun at their accents but also captures a good natured likability that despite the cold, the deep snow and the fact we have a murder or two (or three) … seems a nice place to visit.  In the Coen’s hands though this is that kind of uncomfortably funny, macabre tone they seem to nail so perfectly … is it a comedy?  is it serious? … neither question needs to be answered as you wallow in several excellent performances.  Macy is superb as the awkward, nervous sales man in over his head, and remains one of my favourite actors.  A special mention must of course go to Francis McDormand, another superb actor who pretty much steals the movie even though she doesn’t appear for the first half hour or so.  Buscemi is also great as is a dead-eyed, sinister Stormare to round out a great cast.

This should probably go on record as one of the Coen’s most satisfying and well played movies and if you haven’t seen it, I really think you should.

The Blu-ray is a re-release and remastered version of the earlier HD release and boasts a very detailed image, with plenty of clarity and detail to things such as cars, signs, close-ups and in door scenes.  Outside it gets a little softer but considering the amount of snow and distant shots this should be expected.  The sound in either DTS HD Master Audio 5.1 or Dolby Digital Surround 2.0 is more than acceptable but for a gentle, talky movie it’s not going to be a fully immersive showcase for your system.  Extras include an informative commentary by director of photography (and Coen regular) Roger Deakins and also a fun and interesting trivia track to play as you watch the movie.  As this gained a big cult following after release and plenty of talk about it’s apparent true story (it isn’t) – this makes for a worthwhile inclusion.  An archival documentary, a photo gallery, trailer and TV spot also round out this release, making for pretty decent treatment of a genuine modern classic.