The story is, eight different people all arrive at an organization to sit an exam for a single position.  Yet when all together they are each given a sheet of paper and a set of rules, including the fact there is only one question and only one answer – and eighty minutes on the clock. 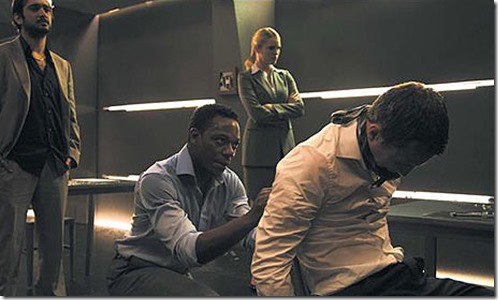 Co-starring British names such as Jimi Mistry, Colin Salmon etc. this was claustrophobic stuff.  I liked the idea of one setting and the fact they were all very different people, from different ethnic backgrounds, all trying to figure out how to win and whether or not to turn against one another.  It reminded me a great deal of the Saw franchise, minus the blood and guts of course … but the fact that a higher power was playing a game and had rules they had to follow, made for gripping viewing.

The only slight let down was the big reveal, and in the closing moments I’ll admit I got a bit lost as to what was really happening – so no big wow moment for me, or maybe what it was all about wasn’t that big a revelation.  Overall though for solid performances and a clever, twisting and turning concept – this still impressed.