I have a funny relationship with comedies (pun not intended).  I’ll admit I may not be the best person to review them, as I tend to take other genres more seriously, but that isn’t to say they don’t have their merits.  This entertaining road-trip of a story has Jason Sudeikis (Horrible Bosses, Hall Pass) as small-time drug dealer David who gets the chance to score big when asked to travel to Mexico and bring back some marijuana for a local big shot.  Being a complete amateur, David hatches the plan to go as a family on holiday in an RV, and ropes in next door neighbour Jennifer Aniston along with the geeky kid from down the hall and the local homeless girl. 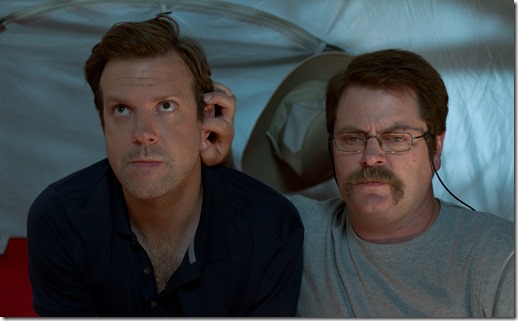 A fun concept helped immeasurably by a snappy script with plenty of great lines (which are mostly all taken by the always decent Sudiekis).  That being said, Aniston carries her own by not just strutting her stuff as a hot stripper (daaaamn girl, where’d you get that body?) but also having some great moments herself (punching Scottie P!!!), aided well by Son Of Rambow’s Will Poulter and hey, isn’t that Julia Roberts’ niece?? However it’s gags don’t quite have the outrageous sucker punch of more juvenile comedies like the aforementioned Hall Pass and even the Harold & Kumar movies (see, my limited viewing history?), and that villain was more of an after-thought I’m guessing.  It also gets rather predictable towards the end.

Still, this had personality to spare and a good enough cast to carry this viewer through to the end with a smile (and those out-takes are great).

1 thought on “We’re The Millers”