Inspired once again from a post over at The Sporadic Chronicles Of  A Beginner Blogger, thought I’d post what female characters / actresses I’ve crushed on in television… Not quite as easy as my movies list (click!) I’ll admit, but interesting to compile none the less … in no particular order.  Warning… slight spoilers may appear. 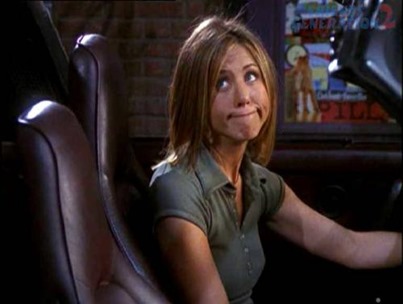 A fan favourite but the ‘every guy’s ideal girlfriend’ appeal of Jennifer Aniston’s ‘Rachel’ in the hit sitcom is the basis of why Aniston continues to be one of the most likeable actresses around today.  Her on/off love story with on-screen boyfriend ‘Ross’ was also one of the highlights of the show.

Arrogant but spunky, an expert thief who has the ability to run like The Flash but hides the fact she was actually a paraplegic before her ‘powers’ kicked in … so a vulnerable side too.  Played wonderfully by Brea Grant.

Maggie in The Walking Dead

Tough, very attractive and her often troubled love affair with on-screen husband ‘Glenn’ really makes this show increasingly watchable.  Helps that Lauren Cohen’s a fine actress too, and can handle a machete like a ruthless killer.

When I first saw this red haired bombshell, I thought … wow, who is this actress?  Yes her character may be a bitch, but as seasons continued, we did get to see a gentler side, and damn, that face, those lips…I could go on.  Christina Hendricks is what they were talking about when they coined the phrase ‘…and God Created Woman’.

Evangeline Lilly’s vulnerable, feisty and sexy performance as the duel love interest of both ‘Jack’ and ‘Sawyer’ really held this complex, often infuriating but non the less enjoyable show together.  Great to also see Lilly now appearing in The Hobbit movies…makes for a wonderfully alluring elf.

Jessie’s ill-fated girlfriend, the manipulative and sexy Jane as played by the beautiful Kristen Ritter may only have a small appearance in the acclaimed show, but her legacy lingers on throughout.  Also those dangerously seductive lips and eyes…ahem.

Played by Linda Cardellini, this tough talking, single mother may have the ex husband from hell and a troubled son, yet her beauty and vulnerability make her one of this long-running shows best characters.

Buffy in Buffy The Vampire Slayer

Ok the fan boy in me was tempted to go for Willow, but really this is crushes and Sarah Michelle Geller’s tough, quirky and sexy Buffy summers is the reason this show was such a massive success.

Taylor Townsend in The O.C.

Played by the gorgeous Autumn Reeser, this character appeared air-headed bimbo but was actually very funny and adorable … helped she was stunning too!  Must be all that Californian sun.

Dr Jennifer Melfi in The Sopranos

From the acclaimed mob drama, how could I forget the smouldering sexiness of Dr Melfi, as played by the lovely Lorraine Bracco?  Made for a big part of the TV show, and the on/off sexual chemistry between her and the late James Gandolfini’s Tony Soprano was almost unbearable … even if it never went ‘there’ between them…

Have you any favourite TV characters that got you all hot under the collar?  Feel free to post a link if you have a list of your own.