Generally movie remakes have a bad name despite Hollywood’s insistence on making them.  However in my experience there are a few that while not always improving on the original, at least do a good enough job to be worth seeing, without insulting the memory of a classic.  Find below a few I personally have enjoyed.

Although not familiar with the Roger Corman original, this Steve Martin, Rick Moranis, John Candy starring musical is a riot … very memorable tunes and great practical effects.  I really need to watch this again… soon!

Was really expecting this to just not get what made the original so good – but it ramped up the gore and violence to epic proportions, had a great cast and was scary … maybe not as tongue-in-cheek as the series is famous for, but still felt like an Evil Dead movie.

Am I alone in thinking this version rocks?  Tons of gore (which the original lacked, even though I know that wasn’t the entire point) a perfectly mad performance by R. Lee Ermey and a twenty something bunch of ‘victims’ you don’t immediately hate.

Charming with a great performance by Richard Attenborough.  A star making turn by the where is she now Mara Wilson (see also Mathilda).  Haven’t seen original but this was a perfect Christmas treat.

Am I cheating by including this?  A deserved genre classic with a (possible) career best from both Pacino and DeNiro, and yes it’s a remake of TV movie L.A. Takedown.

The Assassin (aka Point of No Return) 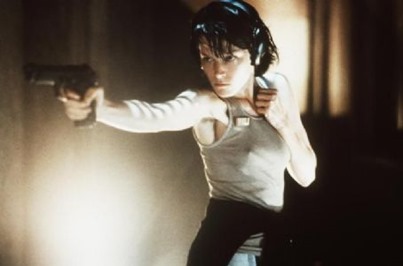 Perhaps sacrilege to remake Luc Besson’s La Femme Nikita, and another I think I’m alone in loving.  I had a major crush on Bridget Fonda in this… but its a competent thriller with several decent performances, including a cameo by Harvey Keitel that’s worth seeing!

Easy one this.  Not seen the original but with a powerhouse performance by Al Pacino and that line ‘say hello to my little fiend’ this took a basic blue print and seriously went to town with it!

This shouldn’t have worked, but with a strong lead by the mouth-watering Mary Elizabeth Winstead  and half decent and freaky CGI, as well as all the atmosphere the original had (ok this is technically a prequel…but it still counts…I think), this really surprised me.

I am starting to think that although they get the worst press, horror remakes have got it right a fair few times going by the list above.  That’s just my opinion though and you may differ.  So what would your choices be?