Growing up this was one film I kept catching on TV, and it left a long standing imprint on me as a movie fan.  Brian De Palma’s 1978 thriller was sort-of his follow up to Carrie, exploring again psychic telekinetic individuals, this time two instead of one and bringing back Carrie’s Amy Irving now alongside screen legend Kirk Douglas.

Douglas is a secret agent whose son has powerful telekinetic abilities that his shady friend, John Cassavetes wants to take advantage of.  After an explosive opening where Douglas is betrayed and his son kidnapped – we switch to 11 months later where we meet Gillian, a young woman only just discovering her abilities who seems to have a psychic connection with Douglas’ son – and therefore becomes of interest both to Douglas and Cassavetes. 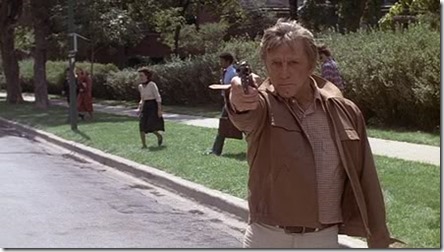 With a haunting, eerie score by John Williams and several stand-out set-pieces (the fairground ride, the slow-motion institute escape) this is De Palma at full tilt.  Strangely it remains one of the famed director’s lesser known efforts, but with a solid turn from Douglas and an emotional performance from the often underrated Amy Irving – I still got a kick out of this, even all these years later.  It’s still scary, especially with Douglas’ son’s powerful, malevolent incidents (hovering in the air in a darkened room, the murder of a woman by making her body spin…) although at times it resembles a 70s cop show with unfortunate comedy bits – and for a movie often labelled as horror – gore and scares are infrequent.  Overall though this is one 70s movie I highly recommend seeing again.

The Blu-ray from Arrow Video is decent.  The picture is vivid if at times a little soft and over-saturated but in good shape mostly – and the sound punchy and fitting to the period. The 4.0 DTS soundtrack can jump about at times from clear dialogue to an echoey locked in a closet sound (?), so I found the 2.0 soundtrack the most pleasing.  Extras are also plentiful with documentaries, interviews, an isolated music score, a nice booklet with a new write up on the movie, and a reversible sleeve with new art work.  Again another stellar job from Arrow.