It always surprises me that it wasn’t until the late nineties that I first watched and loved Stanley Kubrick’s much acclaimed horror masterpiece The Shining.  I have subsequently watched it several times over the last decade or more and enjoyed it on a very appreciative level – it remains for me the perfect horror movie – both technically and when it comes to foreboding atmosphere.  So a documentary exploring the many hidden meanings supposedly within the movie was very appealing. 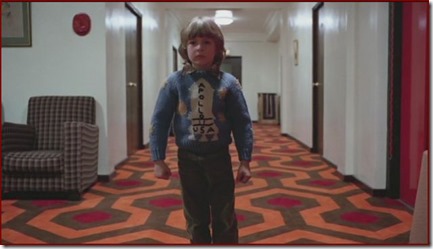 Directed by Rodney Ascher and pieced together from various testimonials by film fanatics, specialists and The Shining fans – this is a fascinating look at a remarkable piece of film making.  Whether or not I agree with some  of the theories presented here (many of which do seem a bit crazy) it makes for interesting viewing, especially if you have a good knowledge of the movie itself.  It made me want to sit down and watch the movie again, but not necessarily to spot all the Native American imagery or vague nods to the holocaust(!) but because its just a damn good piece of entertainment.  I think some of the people talking on this doc have waaay too much time on their hands, but some observations, such as little (deliberate?) mistakes and freaky coincidences are fun to ponder.