This was kind of a last minute decision.  I was after something with a bit more depth and a different flavor than what this summer has presented for the most part, and on seeing the trailer, it seemed this Matt Damon vehicle was exactly the ticket.  It’s 2154 and the wealthy live on a space station paradise while the rest of the population resides on a ruined, diseased Earth, until a man dreaming of escaping to the world above takes on a mission that could change everything. 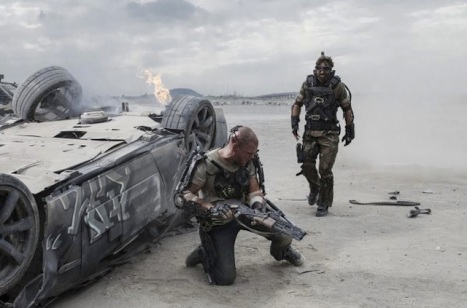 Director Neil Blomkamp’s last movie the rightly acclaimed District 9 was one of the most refreshing and interesting science fiction movies I had seen in a long time, and that same approach and almost documentary style realism (give or take the odd futuristic idea) is carried over to this .., bigger in scale and concept but equal in emotion and intimacy.  Like Hollywood had taken on board what he had achieved originally and said, OK son – here’s a few extra million – wow us.  And wow us he does.  The setting although not exactly new (the idea of the wealthy separated from the impoverished has been played out since back in Blade Runner days) … does justice to an old idea with an above average turn from Damon as well as good support from Alice Braga and also a boo-hiss Jodie Foster (a first?) – weird (even for her) accent aside.  Stealing the show however is Blomkamp regular Sharlto Copley (well, he was the star of District 9) who makes for one of the most relentless and brutal villains in movie history – I kid you not.  Influences from the world of video games can not go unnoticed either, with a clear borrow for Elysium from Mass Effect’s citadel.  Add to this a plot that is spilling over with immediacy and pace, and this was a breathless, gripping and fascinating experience.

Nit-picking would be to complain at the over-use of very strong South African accents considering the setting is Los Angeles, possibly echoing the director’s routes – but it’s a puzzling inclusion.  However Blomkamp still manages to prove himself a science fiction auteur, and with slick action and a dramatic, intense pace but with the intelligence to really make you care – I came away highly impressed,