The found footage sub-genre of horror movies is probably on it’s last legs.  Having started out with the popular but disappointing Blair Witch Project and then finding it’s feet with movies like [REC] and Paranormal Activity, the genre has mostly become an acquired taste, some hating the shaky, hand held style, whilst others like me feeling it fully immerses and is therefore a lot scarier than your usual horror experience. 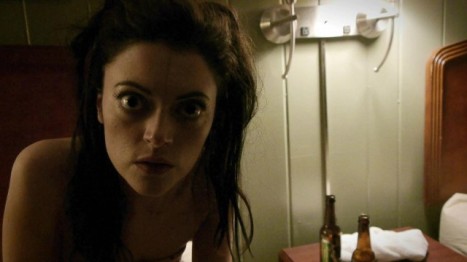 A collaboration project between directors such as Ti West (House of the Devil), Adam Wingard and Joe Swanberg this has a group of petty crooks filming their various breaking and entering exploits on tape in order to sell them off on the internet and make some money.  When a mysterious fan of theirs hires them to break into an old house and retrieve a particular video cassette … it seems like a run of the mill payday, until what they find in the house causes the crooks to think otherwise.

I liked the set up of this, very realistic and eerie, with a convincing cast and a great concept.  The movie is basically about 5 different tapes, and what has been filmed on each, with stories like a young couple on holiday where an intruder films them as they sleep, to a group of guys on a night out who pick up a freaky girl, then a creepy house with a terrible secret.  All very well done and damn scary – this isn’t the kind of movie to watch if shadowy corridors, figures in the background and the supernatural freak you out.  Add to this smatterings of gore and nudity and well, this pretty much has it all.  I found it all very atmospheric, and yes the shaky cam stuff can get disorientating, but that is sort of the point, the unease, the confusion – you feel like you are there, and you really don’t want to be!

For the most part I thought the various moments of violence and gore were a little over the top (a disembowelment, a graphic throat slitting) as there was enough tension and genuine scares to not need any of that – and the ending was a bit of a let down.  Overall though I really enjoyed this.