After viewing the recent remake, and coming away suitably entertained … naturally thoughts went to seeking out this much loved classic, which I am happy to admit has been one of my favorite horror movies for many years.  Starring Bruce Campbell and directed by Sam Raimi (Spider Man 1-3, Drag Me To Hell), this simple tail of a young couple who go to a cabin in the woods for a romantic weekend, quickly turns into a roller coaster of  demons, possession and gore as the forces of darkness are awakened when Campbell’s character ‘Ash’ unwittingly plays back a recording of a translation from the book of the dead (!). 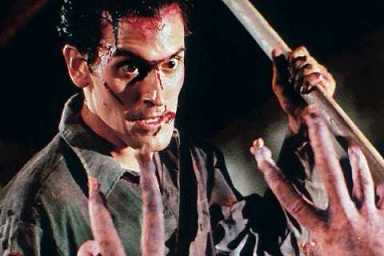 Fast, packed with ideas and with some of the most outlandish and daring steady-cam work that has ever been devised – this is inventive director Raimi playing at full throttle.  Aided by a comedic, physical performance by Campbell and at times almost Tex Avery style violence and slapstick, this echoes those dodgy, low-budget b-movies of the fifties, whilst throwing at the screen the blood splattered excess of the video-nasty era.  The tone here is tongue-in-cheek comedy-horror, and although that can sometimes not work, as in movies like An American Werewolf In London, the balance is just right, making the movie creepy and scary whilst at times laugh out loud funny.  Really, try not cracking a smile when Campbell is beating himself up with his possessed hand, then shriek as a body gets literally eaten by the cellar door, resulting in buckets of blood spraying out.

Acting is not the selling point here, but the cast do their best to handle increasingly outrageous situations, with plenty of screaming and perfectly delivered one-liners (‘groovy’).  Effects-wise the optical effects are showing their age, but were never that great anyway, and the make-up seriously outshine the recent remake for demonic freakishness.  Along with Raimi’s endless imagination, this fired on all cylinders from beginning to end, making for an iconic, very entertaining and a much deserved classic of the genre.  Just watch it!

This newly released Blu-ray boasts a very nice remastered image, that may suffer from slight softness and blurriness at times, still manages to make the movie look better than it has done in years.  Sound-wise we get a 5.1 DTS Master Audio soundtrack that delivers good clarity even if it sounded a little soft during dialogue, although a 2.0 PCM Stereo soundtrack retains the movie’s original sound for beefier results on a 2 channel system.  Extras are exhaustive, with a welcome audio commentary from Bruce Campbell, Sam Raimi and various production members, and we also get several featurettes and picture galleries among other bits and bobs.  Very commendable!