Two things to get straight right away.  This has nothing to do with the villain of cult favorite series Phantasm, and secondly this isn’t the kind of deeply disturbing, torture endurance test that was Martyrs; Director Pascal Laugier’s previous effort.  Starring a dowdy Jessica Biel (sigh…) as a Nurse in a small town that has been rocked to it’s core by a series of child kidnappings, this is a slow burning, creepy and effecting thriller. 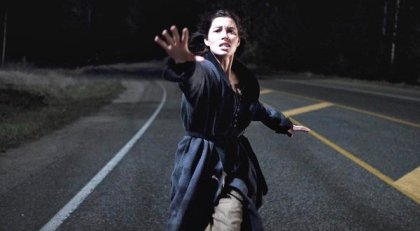 I think anyone going into this with memory of Martyr’s might be cautious.  Without going into detail, that movie remains one of the most disturbing, get-under-your-skin horror movies ever made, and I still haven’t had the guts to sit down and watch it again.  So I understand why this may not have had the press coverage or advertising it deserves.  Laugier’s name has become infamous, and it’s a shame because on this evidence he’s a very capable and intelligent film maker.  I liked how on the surface it was a mystery surrounding a ghostly boogeyman, but with a real-world relevance that should hit a cord with almost everyone aware of child abduction cases.  However this takes a well-trodden subject and shakes it up, with surprising and thought-provoking results.   Add to this some thrilling moments (Biel chasing after the kidnapper for example), unnerving editing / camera work, and solid acting with Biel proving more than her usual eye-candy, and also a quality turn from from Jodelle Ferland (Tideland) … I was suitably gripped.

Laugier’s movie likes to play with your expectations, and although I felt the clever narrative occasionally detracted from the overall impact, I still wish to salute the Director for not taking the predictable route with this.