Has to be said, director Steven Soderbergh has been one of the more prolific film makers of recent years, sometimes churning out several movies a year.  He is also one of the most versatile, now dipping his toe in the espionage thriller sub-genre with this latest offering. 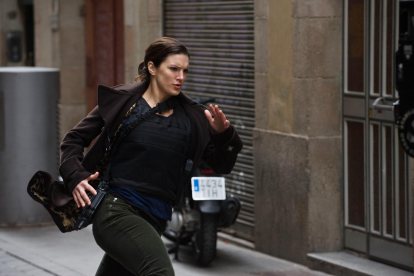 Newcomer and former MMA (mixed martial arts) champion Gina Carano stars as a highly skilled Government agent who during a mission in Barcelona is set up by her own people, and is soon out seeking revenge.  Nothing all that original but for a cool-as-ice performance from the very sexy Carano, showcasing some impressive skills in several gritty and realistically-shot fights.  Realism is the key word here and Soderbergh delivers a very well made movie that shoots the action like a documentary film maker but sprinkles events in an assured, stylish sheen.  It’s a unique approach but helps this movie gain its own identity.

Support from the likes of Ewan McGregor, Michael Douglas and Antonio Banderas are good but nothing all that special.  Clearly this is a showcase for Carano who proves herself not only a believable action star but also a likable screen presence, and I for one will be keeping my eye on her.  Fast, slick and very enjoyable.