When Quentin Tarantino makes a movie, it’s an event.  Fact.  Few director’s have the kind of celebrity status he enjoys, and thankfully more often than not, he can deliver.  Over the years I would say he has evolved, from merely the movie geek wonder kid with a series of snappy scripts and a growing cult fan base, into a film-maker of true credibility.  2009’s Inglorious Basterds proved that, and now with this highly anticipated latest effort, he’s painting the classic spaghetti western in his trademark sharp-as-a-knife dialogue, clever-ass narrative and obscure soundtrack. 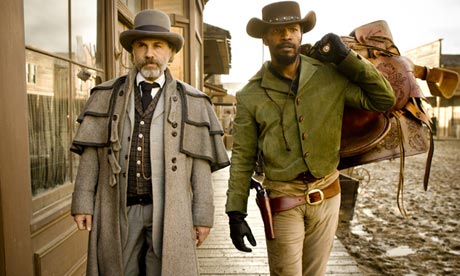 Jamie Foxx (Ray, Colateral) plays Django, a slave who teams up with savvy bounty hunter King Shultz (Inglorious Basterdz’ Christoph Waltz) who promises to help him track down and free his wife, who has been sold off to a local tycoon, Calvin Candie (Leonardo DiCaprio).   Now as should be expected, this isn’t like every other western you might have seen (technically it’s a southern, according to Quentin) with Tarantino’s usual mix of sporadic violence, smattering of carefully implemented comedy and lengthy scenes of tense dialogue all aided by a soundtrack so bizarre and obscure, that the whole thing threatens to turn into farce.  Yet Tarantino is better than that and somehow makes it all work, especially once you get into the groove.  Waltz, as in Basterdz steals the show with a brilliantly charming but no less deadly performance, aided by a perfect Foxx, who owns the title role.  Of course it should go without saying that DiCaprio is also excellent in possibly his first villainous turn (proving very psychotic), and a special mention should go to Samuel L. Jackson who as always lights up the screen every time he appears.

Naturally though this is QT’s gig, working from his own brilliantly entertaining and often shocking script (his take on the slave trade utterly humbled this viewer) … and although stylised and at times comic-book-like (the bloody violence clearly exaggerated) still nails one of the darker times in American history.