Of all the movies released in 2012, this was my most anticipated.  I am a huge fan of The Lord of the Rings, particularly the movie trilogy, and despite some reservations regarding this adaptation of the much loved book, from the dropping out of Guillermo Del Toro to the spreading of the adaptation over three movies  … what I witnessed last night has put (almost) all such fears to rest. 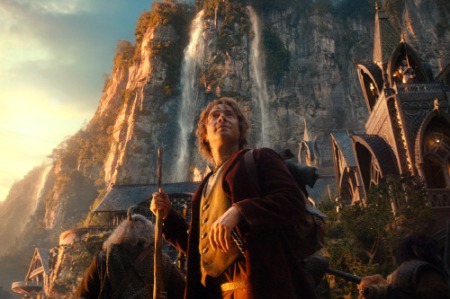 Bilbo Baggins (Martin Freeman) is called upon by long time friend and famed wizard Gandalf to embark on an adventure with a band of dwarves, to journey to the lonely mountain and reclaim a desecrated kingdom back from an infamous dragon.   Of course Bilbo not being much of a hero (at this stage) is reluctant to join the quest, but is soon setting off in search of Orcs, Trolls and a bountiful treasure.  Immediately I was transported back to the franchise I had watched in such awe years ago (and revisited on Blu-ray), with grand spectacle, stunning set design and beautiful New Zealand landscapes bringing to life Middle Earth equally as well as before.  I’ll admit to not exactly understanding why Bilbo would even be involved in such a suicide mission with folks he has nothing in common with, just because a wizard pushes him into it … and the immediacy and importance apparent in the Rings trilogy, seemed absent.  That being said the characters (including a trio of comedy trolls), wealth of imagination and truly epic battles and confrontations, quickly glossed over such quibbles.

This first foray into a new saga in the J.R.R. Tolkien universe felt as good as I could have expected, may be a tad lightweight, but has more than enough personality and jaw-dropping spectacle to make it worth your time.  Oh and that hefty 2hrs 45 minutes run time flew by.  Martin Freeman is well cast as Bilbo, different enough from Elijah Wood’s Frodo (pointless cameo aside) to give the new trilogy its own identity, and with quality support from the brilliant Sir Ian McKellen as well as the likes of James Nesbitt, Hugo Weaving and Cate Blanchett – this Middle Earth fan-boy was grinning from ear to ear.  Director Peter Jackson promised big things with this new entry, and although I’m predicting the best is yet to come – I’m happy to say this still delivered.  Bring on The Hobbit: part 2!!

1 thought on “The Hobbit: An Unexpected Journey”