Supernatural-themed horrors really scare me.  To the point I pretty much avoid them.  So I haven’t seen for example, the Paranormal Activity movies, for fear of them playing on my mind.  For me this shit could happen.  Yet sometimes I am brave enough to give them ago, and so chose this somewhat underrated, but steadily well reviewed entry. 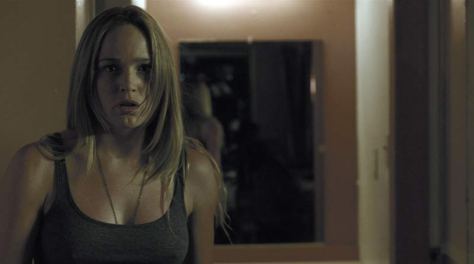 Annie (Caity Lotz) returns home for the funeral of her mother, who inflicted a traumatic childhood on her and her sister years previous.  With much resentment in her heart, she begins to investigate the sudden disappearance of her sister, who was last known to be staying in the house where their mother lived.  Yet there seems a presence in the house, and before long it’s up to Annie to discover what it wants and put it to rest.  Nothing unique here, with plenty of creepy atmosphere, dark corridors, flickering lights, and (interestingly) strange rooms that aren’t meant to be there (!).  Newcomer director Nicholas McCarthy certainly knows how to drive up the chills, and has some well staged shocks that don’t go for the predictable, using technology and foreboding atmosphere well.

The story did keep me gripped and pulled me in, wanting to know the background to certain characters and especially why certain things were happening.  Yet this movie answered little, and despite a good twist towards the end … it only ended up adding to my want of answers.  I don’t like it when things are just how the movie says they are, and doesn’t bother to explain why.

So despite potential, I was left unsatisfied – although generally this was well acted (even if the alarming amount of cleavage & panty shots seemed gratuitous) and was still scary.  I just wish it had delved a little more into the characters.  Oh, and that title is never explained.