aka Get The Gringo

For a time I began to feel we had seen the last of a decent Mel Gibson film, that versatile actor / director who gave us stellar performances in the likes of Lethal Weapon, Ransom and Braveheart.  Yet despite various social scandals and religious outbursts it seems this actor is crawling his way back … and if nothing else, this proves that Gibson has still got it. 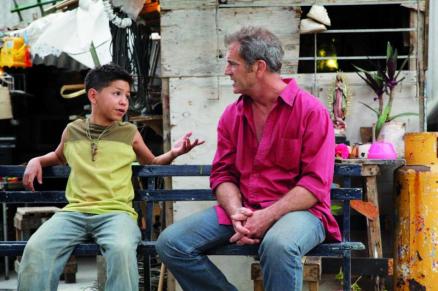 Mel plays a crook who following a Police chase across the Mexican border, gets caught with $2 million of mobster money, and is subsequently thrown in a Mexican prison.  Now this isn’t no ordinary prison, but more a closed off town where families and children can live with the in-mates.  Soon Mel befriends a young, street-wise boy who confesses that a local mob leader, who pretty much runs the prison wants to take his liver due to a medical condition.  So then it’s up to Mel to figure out a way of not only helping the boy and his mother, but eventually escaping.

Mel Gibson is on fine form, playing it very much as if his character ‘Porter’ from Payback had been thrown in a prison.  The supporting cast is almost entirely Mexican, meaning the movie has a lot of subtitles, which did feel distracting at times. However performances all round are decent (especially Kevin Hernandez as the boy) and the action and situations kept me guessing. Former Assistant Director Adrian Grunberg (in his directing debut) has delivered a beautifully shot and energetic thriller that’s often lighthearted (with a comically dry voice over), but also down and dirty violent when it needs to be.