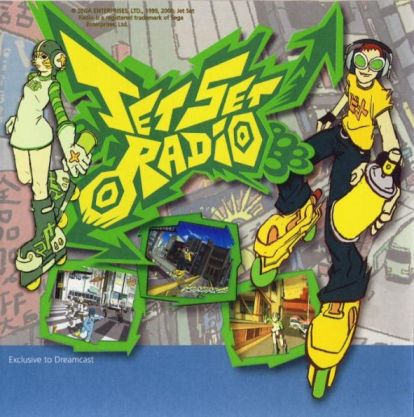 This blog has mostly moved away from reporting on video games in recent months, as I feel it isn’t really what I started this site up for.  But every now and then I just feel the need to tell the world about certain games.  Jet Set Radio (aka Jet Grind Radio) is one such beast, newly released last week on XBOX Live Arcade and Playstation Network, this HD re-make of the Sega Dreamcast original has thankfully for me, lost none of its magic.  The game has you as a member of a street gang who travel around a cartoon version of Tokyo claiming their turf by spraying graffiti and chasing off rival gangs, whilst at the same time avoiding the Police (or Army, or Assassins).

Developed by the now defunct Smilebit and released by Sega in 2001, this is a game with a very unique identity.  The game is just pure fun to play, challenging due to strict time limits and  a quirky control method that takes a bit of getting used to – but for about £5 this is a steal and worth every penny.  The game is also huge with various vibrant districts to skate around and just enjoy exploring, and the cast of characters are pure Japanese  brilliance.  Now the icing on this wonderful cake is also its bubble-gum pop soundtrack that mixes dance, techno, rock and synth wonderfully to create a possibly bonkers gaming vibe. 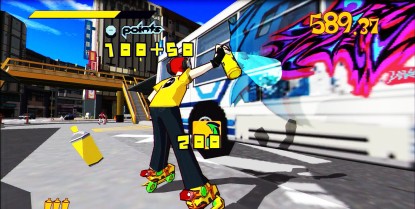 The HD re-release looks gorgeous.  The graphics are very colourful and the art design has not dated at all.  Ok there are a few low-res textures, pop-in rears its head (as it did in the Dreamcast version) and glitches and a few audio stutters do occur.  These could all have been addressed, but this is still far from a lazy port.  In widescreen on a big TV it all just looks stunning and with a silky smooth frame rate – I couldn’t help but be blown away all over again.

The 2nd greatest game I have ever played (next to Half-Life 2).  Essential for any ‘true’ gamer’s collection.