As a fan of David Cronenberg for many years, I will normally seek out anything he does.  Although he has stepped away from his horror background of late with thrillers A History Of Violence and Eastern Promises, he has maintained throughout an expert eye for emotional character pieces, none more so than this absorbing drama. 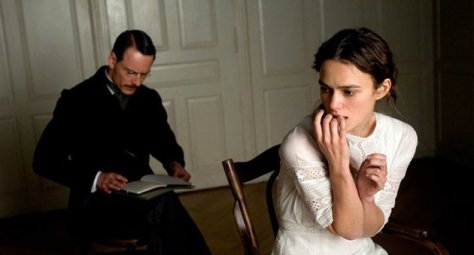 Michael Fassbender is Carl Jung, a Psychologist working in Switzerland who comes across a young woman suffering from hysteria (Kiera Knightley) and turns to famed professor Sigmund Freud (Viggo Mortensen) to help in her treatment, leading to the beginnings of psycho-analysis.  Although the subject fascinated me, I was surprised to be drawn in so deeply by this well acted and interesting movie, which has three strong performances from its leads, especially Fassbender in a very complex role as a man torn between his professional ethics and his sexual desires.  Mortenson is also very good as Freud, although for such a famous name, is a little side-lined.  Knightley, although effective as the troubled Sabina Spielrein is somewhat over the top, with her constant gurning and facial tics bordering on comical.  Doesn’t help that her accent is also pretty ropey.

For a David Cronenberg movie this may be lightweight (the s&m aspects of Spielrein’s condition are only lightly explored), but his often used themes of human psychology and sexuality are a perfect fit, and along with some simply beautiful locations (the architecture and settings of Vienna and Zurich enrich proceedings) and compelling performances, I found this very enjoyable.

1 thought on “A Dangerous Method”