As followers of this blog will attest, I love horror movies.  I like how nothing is safe in a horror movie, and anything could happen.  I like the suspense, the atmosphere and the gore of a horror movie.  In recent years, the safety net has been dropped from horror and it seems (almost) anything is possible.  This Indonesian movie can be held up as one example of this new era – and oh my god, does it pack a punch. 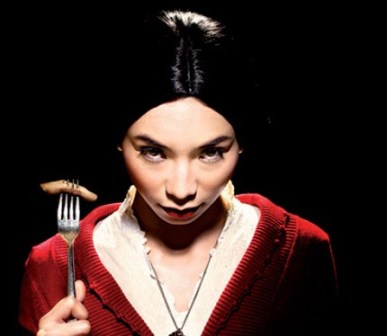 In the grand tradition of cult favourite The Texas Chainsaw Massacre, a group of twenty-something friends stumble upon a girl in the middle of the road after a night out on the town, and offer her a lift back to her secluded house in the woods (!), where they are invited by their freaky, forever young mother, to stay for a meal as a thankyou for their hospitality.  Yet soon the group are drugged and wake up in a cellar, tied up.  A night of unrelenting terror then follows.

This admittedly clichéd set-up is followed by a tour-de-force of violence, butchery and extreme blood-letting as the group fight for survival.  There really is nothing left to the imagination here, and viewers of a squeamish disposition should stop reading now – this is not your movie.  There are graphic scenes here of dismemberment that many a movie would shy away from – but this one had some cast-iron balls and for the most part my eyes were bulging and my jaw had hit the floor.  I would have liked more light shed on the background of the family and their motives, and some of the characters were rather annoying and lacked personality.  This movie however had the same tone and bold-execution as French masterworks Frontiers and Inside that although not doing anything particularly imaginative – delivered as an entertainingly brutal and unflinching experience.